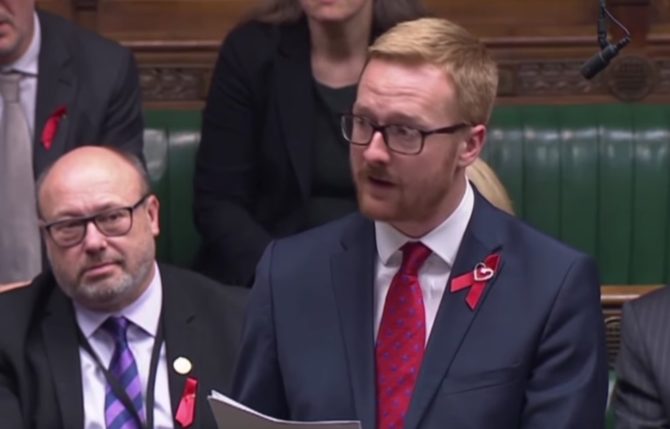 Lloyd Russell-Moyle is a British MP who this week addressed the House of Commons, opening up about the fact that he’s HIV-positive in order to combat stigma around the disease.

His disclosure comes just ahead of the 30th anniversary of World AIDS Day on December 1.

“Such events are also deeply personal to me,” he said of the occasion. “Next year I will be marking an anniversary of my own – 10 years since I became HIV positive. It has been a long journey, from the fear of acceptance and today, hopefully, advocacy, knowing that my treatment keeps me healthy and protects any partner that I may have.”

Russell-Moyle was candid as he walked his colleagues through his experience of testing positive:

“When you get that call from the clinic and they just say: ‘You need to come in.’ They don’t tell you the details, and you know immediately that something is going to be wrong….So all the different worst case scenarios flash through your mind….At the same time you are working out all the ways that this is some joke, some technical error, some tiny thing that they’re going to tell you that you’re going to be laughing about later on…and then they tell you and it hits you like a wall…Nothing quite prepares you for when they say those words…You walk out feeling totally numb, with a million things going through your mind, and at the same time a sense of absolute nothingness.”

He also spoke about being undetectable, explaining that means he cannot transmit the virus.

“I wanted to be able to stand here in this place and say to those who are living with HIV that their status does not define them,” he added. “We can be whoever we want to be, and to those who have not been tested, maybe because of fear, I say to you: it is better to live in knowledge than to die in fear.”

He later reflected on his decision: