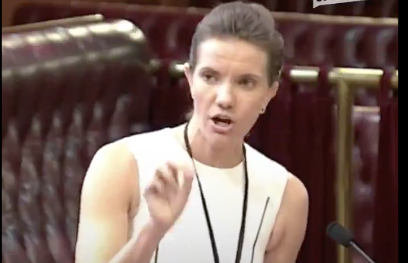 As RuPaul’s Drag Race continues its quest for world domination, it’s only fitting a bit of drama would ensue. What we didn’t expect, however, was for that to play out on the floor of the Australian Parliament.

To back up a bit, Australia was set to host the latest installment of the Drag Race franchise until setbacks brought on in part by COVID restrictions led to production being moved to neighboring New Zealand. Now titled RuPaul’s Drag Race Down Under, the series will see queens from both countries competing for the crown.

Rose Jackson, an Australian Labor Party member of the New South Wales Legislative Council, saw the move as a massive missed opportunity. And she wasn’t afraid to let her colleagues know.

“RuPaul’s Drag Race is massively popular,” Jackson accurately stated from the floor of Parliament. “It’s not a case of they should have called us; we should have been calling them to say what can we do to keep this product in Sydney? How can we make this more attractive for you? The makeup artists, the costume designers, the set designers, the lighting designers, the performers, this was their moment to showcase on an international stage what they were doing and the New South Wales Government didn’t even lift a finger to try and keep that production in Sydney, embed streaming services in Sydney.”

“Facts are facts,” she added. “This was a massive missed opportunity. It’s sickening — and not in a good way — that the New South Wales government let Drag Race Down Under slip away and the minister should sashay away and make sure it never happens again.”

Can she get an amen?

So last year @RuPaulsDragRace had to move production of Drag Race Down Under to NZ. Turns out the NSW Govt. did NOTHING to keep production in Sydney! For shame! #dragrace #rupaul #dragracedownunder #NSW #nswpol pic.twitter.com/I58co4IwyB

“We love a reference queen!” one commenter wrote.

RuPaul’s Drag Race Down Under is reportedly set to premiere later this year.