At long last, after years of blind items, deep background reports, hashtags, fan bickering and general craziness, director Zack Snyder’s magnum opus of the DC Comics superheroes finally lands on HBO Max. A bit of background: this new version of 2017’s Justice League clocks in at a whopping four hours, two minutes, and restores director Snyder’s original vision for the film as a sci-fi fantasy epic; he stepped away during production to deal with a family tragedy, and was replaced by Joss Whedon who ghost directed the theatrical version.

Make no mistake, this Justice League doesn’t make use of bad sitcom jokes (as the theatrical cut did), and has more in common with Lord of the Rings than The Avengers. If Richard Wagner wrote a superhero opera, it would probably resemble this: a sprawling, mature, clash of mythic characters against dark gods hellbent on enslaving humanity. Best of all, this new version also restores significant subplots involving queer star Ezra Miller’s The Flash, and Ray Fisher’s Cyborg. Gratuitous scenes of Fisher, Jason Momoa and Henry Cavill wearing only gray sweatpants are an added bonus. Love or hate its titanic imagining of the iconic characters, Justice League is a one-of-a-kind work of artistic vision rarely seen in blockbuster filmmaking today. That alone makes it worth watching.

Grand dame of soul Aretha Franklin gets the biographical treatment in this new National Geographic series starring Oscar nominee Cynthia Erivo and Courtney B. Vance. Not to be confused with Respect, the Jennifer Hudson-led theatrical film set for release this year, Genius: Aretha looks at how Ms. Franklin’s upbringing in the black church inspired her music, as well as her activism during the Civil Rights era. The show also examines her contentious relationship with her minister father CL Franklin, and how his constant philandering shaped her self-esteem and relationships with men. Genius: Aretha drags a bit in its first few episodes, but springs to life every time Vance and/or Erivo take the screen. Indeed, the latter is absolutely wonderful in the title role, and even manages to channel Franklin’s distinct vocals in new, Erivo-recorded versions of classic Aretha songs. Uneven, inspiring and anchored by classic songs and a megawatt performance by Erivo, we suggest giving the show a chance. If nothing else, we expect viewers will revisit some of Franklin’s classic music, which is never a bad thing.

The Nail Biter: Q-Into the Storm

The website QAnon became one of the great buzzwords of the 2020 Election, as well as the capitol insurrection of 2021 that left five people dead. This six-part docuseries from reporter Cullen Hoback traces the rise of QAnon beginning in 2017, dissecting the appeal (to those who find it appealing, of course) and begging the ultimate question: who is Q, the mysterious figure that claims to be part of Donald Trump’s inner circle. Hoback’s investigation doesn’t exactly follow straight lines, particularly as he uncovers one bizarre, eccentric character (A wheelchair-bound hacker? An adult entertainment magnate?) after the next, and encounters false leads designed to throw him off the investigative trail. When rumbling about COVID-19 begins to rise, and with Q spreading myths of a hoax, what started as an investigation into an internet legend becomes a horrifying exploration of groupthink and the Infodemic.

By the time the true identity of Q gets revealed in the final episode—which it does—Hoback raises the most disturbing question of all: Why would someone do this? Does Q want to further a fringe-right ideology? Or is it just one person proving he can troll the conservative masses? Q: Into the Storm is, in short, addictive as hell, a series full of characters as weird as disturbing.

Writer/director Jon Garcia continues his exploration of taboo relationships and spiritual connection with Luz, a new drama about love in a prison yard. The story follows Reuben (Ernesto Reyes), a young father sent to prison for a drunk driving accident. There, his cellmate Carlos (Jesse Tayeh) gives him advice on how to navigate prison: never associate with gays. That advice can’t stop one late night-confession leading to a night of passionate lovemaking between the cellmates. With Carlos leaving prison the next morning, Reuben vows to find him again.

As with Garcia’s previous movies Sex Weather and The Falls trilogy, Luz postulates that love begins with a spiritual connection, one which does not know any kind of gender or sexual boundary. Reyes and Tayeh both give convincing, committed performances in the leads, even in some very graphic sex scenes requiring full-frontal nudity. Moving, tender and charged with a powerful undercurrent of eroticism, we recommend it for anyone looking for an unconventional romance or a deep meditation on the nature of love.

The Catch: See Yourself, Be Yourself 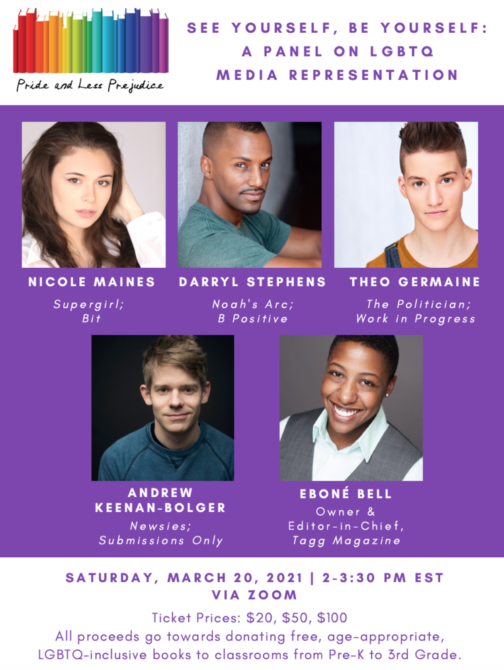 We’re still lamenting the cancellation of one convention/Pride festival/symposium after another thanks to COVID-19. How fortunate, then that this special panel on LGBTQ representation in film and TV, some of our favorite people. Nicole Maines (Supergirl), Darryl Stephens (Noah’s Arc), Theo Germaine (The Politician), and Andrew Keenan-Bolger (Newsies) will all share their candid thoughts on working as out-queer people in showbusiness, the obstacles they face and the future of queer folk on both sides of the screen. Proceeds from the event also go to help include LGBTQ-centric literature in school libraries.

Director Chris McKim spotlights and celebrates the artistry of David Wojnarowicz, a mixed-media artist that gave voice to queer rage at the height of the AIDS crisis. Using a mix of video footage, audio recordings, photographs and Wojnarowicz’s work, McKim traces the artist’s origins in an abusive, New Jersey household to his rise within the New York art scene and, ultimately, to his death from AIDS at age 37. For our money, Wojnarowicz reminds us of Allen Ginsberg, albeit as a visual artist: unapologetic, burning with righteous rage, and defiant to societal norms. McKim channels that rage in the film itself, both over Wojnarowicz’s untimely demise, and because how little has actually changed for LGBTQ people since his death in 1992. Gritty and unapologetic as the man who inspired it, WOJNAROWICZ: F**k You F*ggot F**cker highlights a little-known character in LGBTQ history, and gives him the respectful eulogy he deserves.

In theatres and On-Demand March 19. 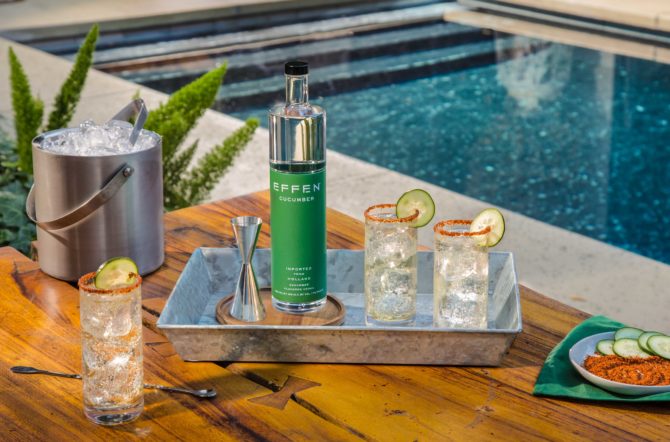 With St. Patrick’s Day arriving again this week, the fine folks over at Effen Vodka have suggested this libation of the week. Sweet and earthy, it offers a refreshing, springtime taste and packs enough wallop to pair well with any of the very strong medicine-titles we recommend this week.

Subscribe to Queerty for a daily dose of #entertainment #beyourself #genius:aretha stories and more