HBO Max ups the ante on hormone-driven teen drama and out-and-out queerness with this new series, created by husband & husband team Daniel & Ben Barnz, as well as their bisexual daughter, Zelda. Genera+ion follows a group of queer high schoolers as they explore young love, lust and try to find their place in the world. The show also looks at the generation gap between young LGBTQ folk, and their parents, some of whom are even gay couples. Justice Smith proves himself a compelling and attractive leading man as the flamboyant teen Chester, while the always dependable J. August Richards and Martha Plimpton steal their scenes as a couple of clueless parents.

Genera+ion sets itself apart from any other teen drama in TV history thanks to its almost exclusive focus on LGBTQ people, and its graphic depiction of teenagers hooking up. In a sense, this is the show filmmaker Gregg Araki spent his entire career unsuccessfully trying to nail down: a sex-positive, sexually fluid story that celebrates young adulthood, woes and all. Viewers who also found Love, Victor too chaste will revel in some of the series’ sexual frankness, while everyone else should delight in the show’s original characters and observation that even if today’s teens are more sexually aware, that doesn’t make them any more mature.

The Snack: The Human Voice

Oscar winners Pedro AlmodóvarPedro Almodóvarf=”https://www.queerty.com/oscar-winner-tilda-swinton-finding-queer-circus-hollywood-20210113″>Tilda Swinton combine talents for this surreal short film, a shoo-in for a Best Short Film Oscar nomination. In the movie—which runs all of 30 minutes—Swinton plays an unnamed woman raging over her lover who has left her. Over the course of the movie, she leaves him voicemail messages, chats him up on the phone, and talks to herself, a bubbling cauldron of ever-hotter rage. Almodóvar breaks with cinematic conventions, showing Swinton wandering off the movie’s elaborate apartment set and into the blank darkness of the soundstage. The camera also tracks overhead, revealing the artificial nature of the stage flats and plywood scenery all before it bursts into flames. Black comedy, relationship metaphor, or feminist manifesto? Frankly, we’re not sure we know how to interpret The Human Voice, but we do know one thing: we loved it.

The Buffet: Boys on Film 21

Speaking of shorts, the ongoing series of short film compilations focusing on male homoeroticism continues, this time with entries from the US, UK, Australia, Romania and Switzerland. This collection totals nine different titles, all of which focus on queer men coming to terms with their desires, coming out, and often crushing on the boy next door. Our pick of the litter: “We Are Dancers,” which focuses on a drag performer and his friends witnessing the rapid erosion of gay life in 1933 Berlin.

The Throwback: Celine Dion’s “Falling Into You”

Canadian diva Celine Dion celebrates the 25th Anniversary of her American breakout album, Falling Into You this week. Featuring the hit singles “It’s All Coming Back To Me Now,” “All By My Self,” and “Because You Loved Me,” the album went on to sell 32 million copies and cement Dion’s place as an international superstar. Frankly, we’ve always found Ms. Dion something of an acquired taste, though we have no doubt that Falling Into You showcases her at her best. Giving some of the old tracks a listen, we couldn’t help but recall the first time we felt chills after hearing the power of her voice. In other words, it’s all coming back to us now.

Speaking of divas, dancefloor queens Dua Lipa and Kylie Minogue combine their talents for this remix of their electropop track “Real Groove.” This remix will, no doubt, make Gen X-ers swoon as it reimagines the song set to an 80s style-synth bass line that recalls Minogue’s take on “Locomotion.” As an added bonus, the accompanying video also features a compilation of archive footage of Minogue performing during the actual era. We couldn’t help but smile at the sight of Ms. Minogue grooving out in a pair of daisy duke shorts and doing the cabbage patch…or her Aqua Net-soaked curls. It’s a fun treat for anyone who loved Kylie then, now or anywhere in between. 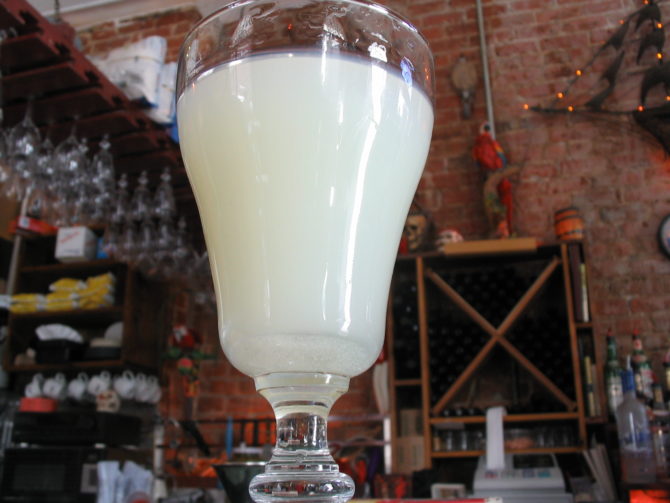 In honor of Ms. Minogue’s awesome throwback video–and the awesome track that goes with it–we thought we’d celebrate by honoring her most iconic movie role as the Green Fairy in Moulin Rogue! Thus, we suggest sipping some absinthe this weekend. With the original wormwood (which gives the drink its hallucinogenic properties), or without, it’s a unique licorice-type flavor will have you ready to jam to some Kylie, or take flight yourself.

Pour absinthe into a glass without ice. Place one sugar cube on a slotted spoon and hold over the glass. Pour ice water over the sugar until it dissolves. Stir well and serve.