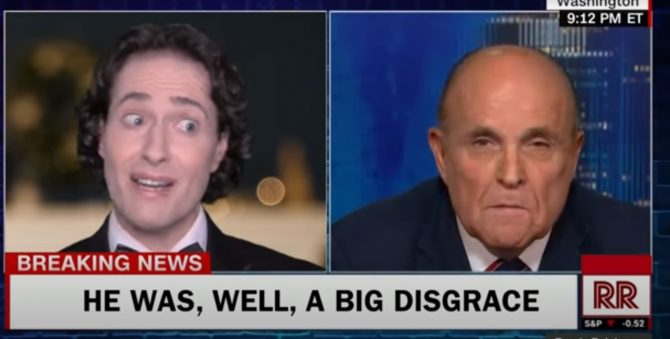 Ever-embattled and increasingly deranged Trump surrogate Rudy Giuliani has become the target of yet another comedic take courtesy of  Randy Rainbow.

Rainbow’s latest video finds the singer/comic getting into the holiday spirit by parodying  the perennial favorite “Rudolph, the Red-Nosed Reindeer.” Rainbow’s version, titled “Rudolph, the Leaky Lawyer,” blasts Giuliani as “batsh*t,” before laying into the former New York mayor’s recent string of embarrassments.

Related: WATCH: Rudy Giuliani just melted during a press conference. So did his make-up.

“Rudolph the leaky lawyer / had a very slimy face,” Rainbow sings. “And to the law profession / he was, well, a big disgrace. Lots of confused New Yorkers / found that they were incorrect. They thought their former mayor / had a little self-respect.”

“Then one night two years ago,” the song continues, “Donald called to say: Rudy with your Rogained roots, help me hide my prostitutes. Then how he sweat and slobber/as he melted on TV. Rudolph the Leaky Lawyer, you’ll go down in infamy!”

Seriously, watch the video and try to not sing along.

Once considered an American hero, Rudy Giuliani has become increasingly viewed as a farce in recent years thanks to his work for the Trump Administration. A string of jaw-dropping incidents over the past month have further damaged his reputation, culminating with the anti-mask former mayor contracting COVID-19 earlier in December.