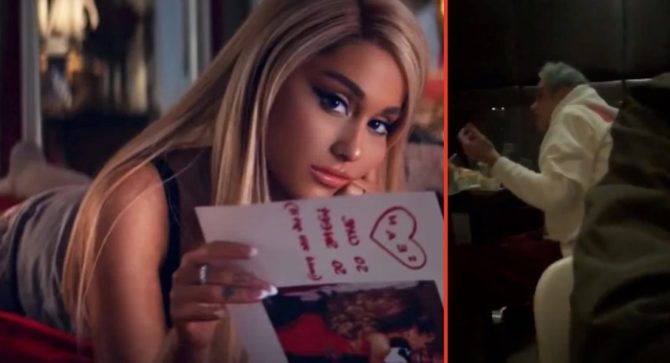 Well this is awkward.

A viral video has been making the rounds of Pete Davidson eating at a New York City restaurant as his ex-fiancée Ariana Grande’s hit breakup jam, “thank u, next”, blasts from the sound system.

The “Saturday Night Live” actor was unwinding at the very gay-friendly Cafeteria in Chelsea after filming the show when a fellow diner captured the situation on video.

To his credit, Davidson appears unfazed as he chows down on his late night comfort food.

“The waiters at Cafeteria just did Pete Davidson so dirty,” Steven Thomas wrote on Twitter, adding, “they are playing thank u, next and Pete is right there, on a date.”

The Waiters at Cafeteria just did Pete Davidson so dirty. pic.twitter.com/jsUdNMf9bq

According to Huffpost, Thomas said he had the same waiter as Davidson, who told Thomas he queued up the tune specifically because Davidson was there.

Davidson and Grande had a very public romance this year, getting engaged in June and breaking up in October.

Related: Troye Sivan and Ariana Grande break it down in new video for ‘Dance To This’

Grande’s “thank u, next”, her bop dedicated to all her past relationships, has become a number one hit.

The video made quite a stir when it was released late last month, which pays homage films like Mean Girls and Bring it On:

“I know some of you are curious about the breakup but the truth is it’s nobody’s business and sometimes things just don’t work out and that’s OK,” Davidson said in November. “She’s a wonderful, strong person and I genuinely wish her all the happiness in the world.”