The Addictive: Trial by Media

Another week, another Netflix docuseries to keep us up all night. Trial By Media examines the role of TV in shaping public opinion and the way that allowing cameras in a courtroom can affect the outcome of a trial. The series begins by profiling the trash talk shows of the 90s in the context of the murder of Scott Amedure by his friend Jonathan Schmidtz. The pair had appeared on The Jenny Jones Show when Scott revealed a crush on Jonathan, who was straight. Three days later, Amedure would be dead. The series also profiles the trial of Illinois Gov. Rod Blagojevich, subway vigilante Bernie Goetz, and the murder of African immigrant Amadou Diallo, and how those cases fueled the cottage industry of courtroom TV. Produced by George Clooney and Jeffery Toobin, the show offers insight, detail and raises a lot of questions. What it does not have, is answers.

Streams on Netflix May 11.

The cult Comedy Central series returns with new episodes on Quibi, complete with the original cast intact. For those who recall, Reno 911! followed the woefully inept police force of the eponymous city, led by the flamboyant but closeted Jim Dangle (series co-creator Tom Lennon), told through improvisational comedy. The new version catches up with Dangle & the Reno squad, updating the war on terror satire with references to police brutality, unarmed shootings, race panic, queer visibility and gun culture. We’re happy to report that the show is funny as ever, and well-suited to the new 15-minute format. Watch and howl.

The Catch: Natalie Wood: What Remains Behind

Actress Natalie Wood doesn’t get enough credit as a pivotal LGBTQ ally at a time when acceptance of queer people was almost unheard of. Her untimely death manages to overshadow both her legacy as an actress, and a friend to the community. What Remains Behind, produced by Wood’s daughter Natasha Gregson Wagner, aims to correct that injustice. The documentary includes extensive interviews with friends and family, detailing Wood’s unlikely career and home life. That includes one of the final interviews of playwright Mart Crowley, whom Wood supported while he penned The Boys in The Band. The film also delves into the circumstances of Wood’s unfortunate death in 1980, decrying tabloid piranhas and lecherous rumors that Wood’s husband, Robert Wagner, with or without the help of Christopher Walken, murdered her. Awkward and redundant at times, What Remains Behind nevertheless offers a deeply personal and compelling look at one of Hollywood’s most interesting stars, one deserving of gay iconhood. That, for us, makes it worth the watch.

Airs on HBO. Streams on HBO.com

We covered this lesbian noir back when it played Tribeca last year. The film concerns a heartbroken woman named Karen trying to recover from (Otmara Marrero, of TV’s StartUp) her break-up with an older girlfriend, known only as D. (Sonya Walger, Penny on Lost). As the couple fights over who gets to keep the dog, Karen retreats to D.’s rural lake house. There, she encounters a snooping hunk of a groundskeeper (Will Brittain of The Colony) and a seductive Fatale named Lana (Sydney Sweeney of The Handmaid’s Tale). Tensions rise, and Karen finds herself entrapped in a web of sex and crime. Clementine meditates on the differences between generations of queer people, aging, and recovering from a breakup, wrapping them in a provocative queer thriller. Slow at times, but always interesting, it makes for fine weekend viewing, and marks director Lara Gallagher as a talent on the rise.

Speaking of underrated figures in showbiz, rock star/actress/chainsaw artist (really) Cherie Currie doesn’t get enough love as for her influence as lead singer of the rock band The Runaways. For that matter, she also doesn’t get enough credit as a bisexual rocker. What a rocking surprise then to land on her new album, which finds the 60-year-old siren in fine vocal form. Even better, Blvds of Splendor features some of the absolute best rock music we’ve heard in ages, due in part, no doubt, to Currie’s stellar collaborators, including Billy Corgan of The Smashing Pumpkins, Slash, The Veronicas and fellow rocker/actress Juliette Lewis. Our favorite track: the title song, a duet with Corgan about a toxic relationship. Admit it, you can relate…then crank this one to full volume.

So COVID-19 has forced entertainers—especially drag queens—to get creative with their performances. Case in point: Queer Quarantine Radio, the new radio drama-style podcast starring BenDeLaCreame, Jinx Monsoon and Peaches Christ. Each episode finds the queens lending their talents to a tongue-in-cheek radio drama, ranging from detective stories to soap operas to family comedies, each peppered with double entendre and innuendo. Goofy and unique to say the least, Queer Quarantine Radio offers a fine diversion, one that fans of the queens and Drag Race will no doubt savor. 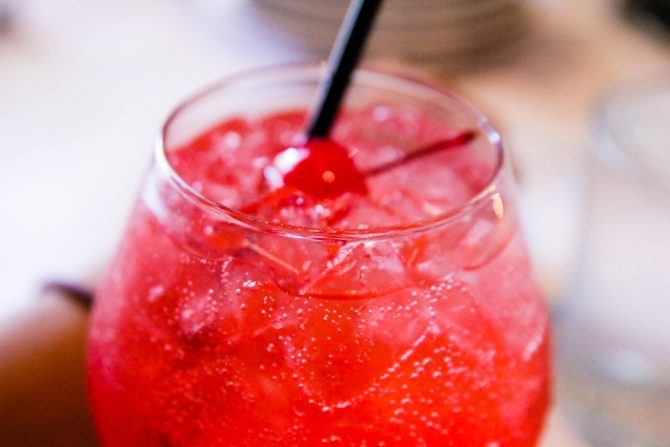 In honor of Ms. Currie’s return to rocking, we offer up this fruity libation so named for her signature tune. Refreshing and effervescent, it’s a fine way to welcome warm weather…even if we’re all stuck inside.

Mix rum and Sprite over ice in a glass. Add grenadine and lime juice to taste. Garnish with cherries and a slice of lime.