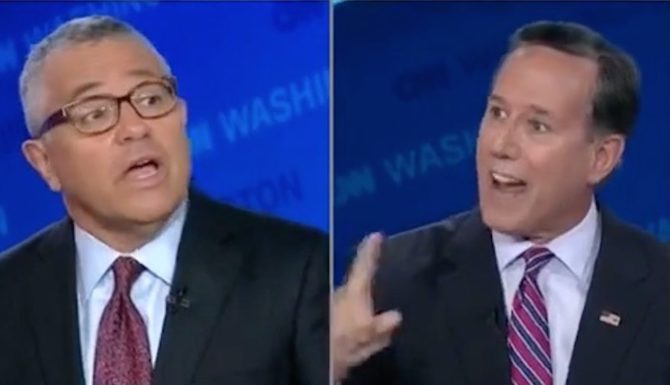 During a recent CNN appearance to discuss the Brett Kavanaugh confirmation hearings, Rick Santorum lost his cool when the conversation turned to business owners denying service to gay people.

“The idea that there’s a contention that bakers don’t allow gay people in their shops, that has never been the issue, and it’s not the issue. And you’re distorting it! To bake a cake for a ceremony that violates their religious tenets. That’s a fundamentally different thing than walking in the door and quit trying to be extremist on these things when that’s not the issue and you know it’s not the issue!”

“No one said you can’t walk in and buy a cupcake at a bakery,” he added.

Related: The Trans Man Denied A Haircut Over “Religious Freedom” Is Exploring A Lawsuit

Except it actually is the issue, because once the it’s-OK-to-deny-gay-people-service ball starts rolling, momentum can keep it moving; that’s the frightening prospect of a far right-leaning SCOTUS.

Toobin tries to make this argument, posing another hypothetical:

“I would probably side with you on that,” replies Santorum.

Got it. So we’re to trust that the guy who fought tooth and nail against LGBTQ equality to keep religious bigots from going too far.