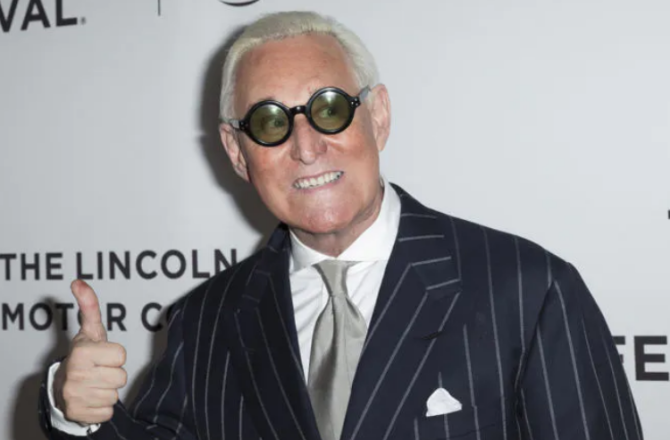 Infamous GOP provocateur Roger Stone appeared before the House Select Committee to Investigate the January 6th Attack on the U.S. on Friday morning, but he was expected to plead the Fifth Amendment to every question.

When issuing a subpoena to the political trickster back November, the committee said Stone “was reportedly in Washington on January 5th and 6th, spoke at rallies on January 5th, and was slated to speak at the January 6th rally at the Ellipse that directly preceded the violent attack on the Capitol. Before traveling to Washington, Mr. Stone promoted his attendance at the rallies and solicited support to pay for security through the website stopthesteal.org. While in Washington, Mr. Stone reportedly used members of the Oath Keepers as personal security guards, at least one of whom has been indicted for his involvement in the attack on the Capitol. Mr. Stone has made remarks that he was planning to ‘lead a march to the Capitol’ from the Ellipse rally.”

We’re pretty sure that earns him a winning card in ‘Sketchy Jan. 6 Bingo.’

Stone has said he would refuse to answer questions under the Fifth Amendment right against self-incrimination.

As he arrived at the hearing, he told reporters he was “doing his civic duty” and that he “may have some comments afterwards.”

Roger Stone shows up to plead the fifth dressed like several characters from Roger Rabbit. pic.twitter.com/N4BuDBoIx8

But as he departed, the only comment he gave was to correct someone for mislabeling his often-worn Homburg hat a “top hat.” After giving a double peace sign á la Richard Nixon, he was off.

Roger Stone leaves O’Neill Federal after about an hour-long deposition with his entourage. No comment on if he spoke with Trump on Jan 6th but does comment on not wearing a top hat today. pic.twitter.com/1xph3RAf9v

We wish we could forget he also has a Richard Nixon tattoo on his back, but the image just can’t be unseen:

Roger Stone has a big Richard Nixon tattoo on his back. Mueller's indictment says Stone would quote Nixon and the Godfather movies: "Plead the fifth. Anything to save the plan."

In the very words of his ally, former President Donald Trump, Stone sure does seem like he has something to hide.

And for once, everyone seems to agree with Trump:

Roger Stone seemed somewhat deflated this morning when entering O’Neill federal for his closed-door deposition – no signature double-breasted suit or top hat either!

These big mouths, Roger Stone, Stephen Bannon, they got a shit ton to say until they are under oath. Then they clam up like Melania Trump's squinty NFT eyes. #PleadTheFifth #GuiltyAsFuck

Roger Stone has arrived for his deposition where he is expected to say virtually nothing, since virtually anything he would say would incriminate him, because he is a lifelong criminal and loudmouth who wants to see Democracy upended and grift from the process.

Roger Stone has decided to plead the grift.

Today Roger Stone will try to plead the 5th as a blanket statement.

Because everything he does is criminal.

If anyone deserves to spend the rest of their life in prison it’s Roger Stone. Do you agree?

Every media headline today should be some variation of “Roger Stone pleads the fifth over his January 6th actions with Donald Trump – what is he hiding?”

No matter what Roger Stone says today, he is guilty as fuck.

So here's the thing about Roger Stone: did anyone think the guy with a giant Nixon tattoo on his back was the good guy?

Roger Stone spent years attacking Hillary Clinton with his QAnon dumbfuckery. She showed up and testified for eleven hours. Stone took his ball and went home.

If someone pitched Roger Stone as a Batman villain, producers would say the character is too over the top.