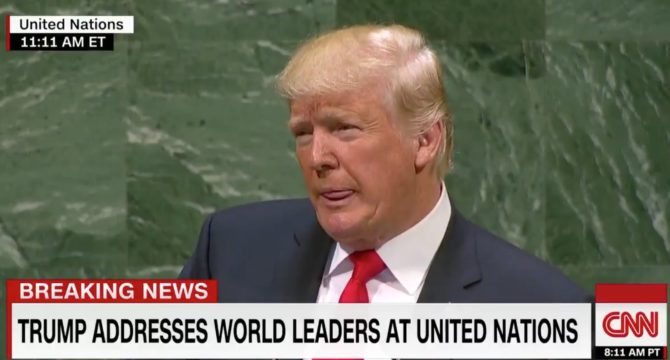 It’s been one long, depressing setup to get to this momentary punchline.

As world leaders gathered at the United Nations General Assembly this week, Donald Trump addressed the crowd, touting the nearly unprecedented accomplishments his administration has seen through.

Related: Does Ronan Farrow have the tapes of Donald Trump using the N-word?

Of course, he added just a touch of extra hyperbole, saying the work they’ve done constitutes “more than any administration in the history of our country.”

The room found that quite funny in so much as anything about this country’s present situation can be funny anymore.

"Today I stand before the United Nations General Assembly to share the extraordinary progress we’ve made. In less than two years, my administration has accomplished more than almost any administration in the history of our country,” Trump says as he begins his speech at #UNGA pic.twitter.com/hM6YH0h60k

Here’s some of the reaction to the clip:

I decided to watch speech until Trump’s first Lie! Took all of 45 seconds! I’m Out! Sad! #TheResistance

I hate to break it to you but they were laughing AT you, not with you.