Leading this edition of our biweekly What To Watch column – featuring highlights you can see in movie theaters, on VOD/DVD, and via TV, cable and streaming services – Sandra Oh and Anne Heche whip out their claws and get dirty in the aptly named Catfight.

Now for the trailers, clips, and details!

Stars Sandra Oh and Anne Heche help writer/director Onur Tukel’s  revenge-y black comedy live up to its title. Heche plays Ashley, a lesbian artist whose lack of success is beginning to wear thin on her girlfriend (Alicia Silverstone), while Oh portrays Veronica, a SoHo trophy wife. Once friends at college, the long separated – by years and now social standing – pair reunite while Ashley is playing cater waiter at Veronica’s party, which opens up old wounds, a violent fight and coma for one of the women, and a She Devil-level feud with two more deliciously epic catfight sequences that are alone worth the price of admission. Also available on VOD same day.

Openly gay Singaporean director Boo Junfeng has truly come of artistic age with this twisty yet subdued, beautifully shot feature. Screened at Cannes last year, Apprentice tells the story of a young prison guard, Aiman, who is drafted as apprentice to the seasoned resident executioner, Rahim. While he literally learns the ropes – death by hanging entails Singapore’s form of capital punishment – and Aiman grows closer to Rahim, we learn that the pair share a personal and complicated secret connection which could lead to serious consequences if and when it comes out…

The Freedom To Marry

Director Eddie Rosenstein gets intimate with some of the movers and shakers in the landmark SCOTUS case that finally brought us marriage equality including Evan Wolfson of Freedom To Marry, civil right attorney Mary Bonauto, and her plaintiffs, April DeBoer and Jayne Rowse (one of the three cases ultimately consolidated into Obergefell v. Hodges). Considering how GOP members are already starting to look into multi-pronged strategy to take away this equality – via conservative SCOTUS appointments and a new case to challenge the decision, and even a constitutional amendment – this documentary is still timely and, when we need it, inspiring

The debut feature from director Andrew Steggall, this British import sees a 15-year-old boy come of age… and queerness. The drama begins when teenager Elliott (newcomer Alex Lawther) and his mother Beatrice (amazing Juliet Stevenson) journey to the South of France, where they have a rural home that, in the wake of Beatrice’s divorce, must be emptied and sold. It’s a melancholy, even despairing affair until a handsome French lad, Clement, enters the picture, dividing his attentions between the mother and yearning son, which actually sparks off a bit of jealousy… Serious family drama, with a little eye candy of course! Extras include interviews.

Natalie Portman earned an Oscar nomination for her portrayal of America’s most iconic first wife – and, tragically, widow – in Chilean director Pablo Larrain’s character-driven chamber piece. Told largely through a flashback framed by an interview with a reporter (Billy Crudup), the film focuses on the immediate aftermath of JFK’s 1963 assassination, from personal minutiae to the political machinery. A deep, beautiful, moving and gorgeously mounted work. Extras include a featurette and commentary.

André Téchiné’s best films revolve around young gay men – evidence Wild Reeds (1994), The Witnesses (2007), and his latest, Being 17, which charts the uneasy relationship between two high school students, Damien and Thomas, in a French mountainside town. Routinely getting into scraps at school, the pair is nonetheless forced together when Thomas’ mother gets sick and Damien’s mother, a doctor, takes in the young man. Now Damien is forced to not only confront but reveal the source of his tension – a massive, lusty crush – with the other boy. Is the feeling mutual? Not your typical gay coming-of-age yarn, this is an engrossing, authentic (the script was co-written by Tomboy‘s Celine Sciamma) work indeed.

The progressive, very queer city of Columbus, Ohio is home to a wealth of vibrant drag and transgender talents, eight of which are subject of this documentary by Gabrielle Burton. The performers profiled include drag king troupe leader Becky, aka The Rev; West Family drag queen mother Chris, aka Virginia West; and label-defying Sile Singleton, a founder of Columbus’ International Drag King Extravaganza conference. Make this the Midwestern half of a double-feature with NYC-set Kiki!

The latest feature by director Andrew Haigh, of HBO’s Looking and gay modern classic Weekend, represents a major change in subject matter – a heterosexual relationship – yet resonates and lingers just as deeply. Based on a David Constantine story, “In Another Country,” Charlotte Rampling and Tom Courtenay star as Kate and Geoff Mercer, a 70-something childless couple about to celebrate their 45th anniversary. When a letter arrives, informing Geoff that the body of his previous lover, Katya, has been found in Switzerland after her disappearance decades earlier, he becomes possessed by her memory, while Kate makes a discovery or two that threaten to undermine their relationship. Extras for this Criterion Collection edition include a documentary, an interview with Constantine, an audio commentary and more.

While it’s downright scummy that CBS is trying to have it both ways as both broadcast network that make money from ads and fanchise fees, and streaming service you must pay for in order to watch some of their new shows (Star Trek is next), this spin-off of The Good Wife is certifiably awesome. Continuing the story of Christine Baranski’s power lawyer, Dianne Lockhart, whose planned retirement is cancelled when she loses everything in a Bernie Madoff-esque ponzi scheme, it also stars Rose Leslie as young lesbian attorney Maia, who happens to be daughter of the Madoff-esque character. Must see TV… but c’mon, CBS. 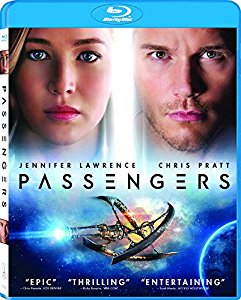