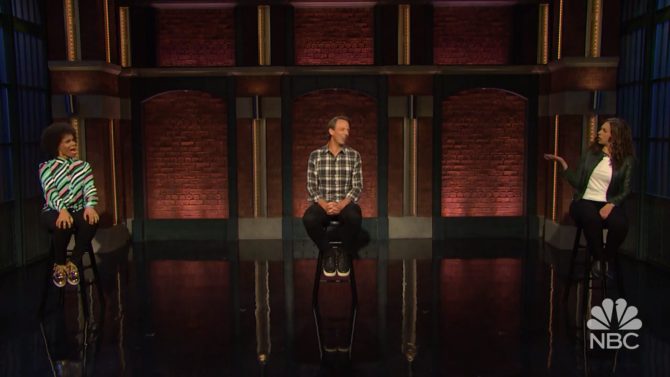 Late Night host Seth Meyers wasted no time in reacting to the appointment of Amy Coney Barrett to the Supreme Court Tuesday night, ripping into the conservative justice as part of a segment called “Jokes Seth Can’t Tell.”

As the title implies, the segment consists of jokes written by the Late Night writers that Meyers, as a straight, white man doesn’t think he could get away with telling. For that, he enlisted two of his writers, Amber Ruffin, who is Black, and Jenny Hagel, who is gay, to deliver the punchlines.

Meyers and Hagel lit into Coney Barrett as part of a reference to a forthcoming gay-themed Christmas film on the Hallmark Channel. The plot, explained Meyers, follows a gay couple trying to adopt a child.

“And the town that rises up to defeat them!” Hagel chimed in.

“I’m just kidding,” she then added. “A town’s not gonna keep gay people from adopting. Amy Coney Barrett is.”

And the segment goes on like that. Meyers and Ruffin also lit into White House spokesperson Kayleigh McEnany who asserted that the phrase “Make America Great Again” is synonymous with “Blue Lives Matter.”

“And both are synonymous with the phrase ‘But where are you from from?'” quipped Ruffin.

Have a look. We don’t know about you, but we need a laugh.