The Step Out: Little Women

We’re not sure we needed yet another adaptation of the staple of Jr. High reading classes. That said, this latest incarnation does have the advantage of having Gretta Gerwig (Ladybird) in the director’s chair. A great cast which includes Saoirse Ronan, Emma Watson, Timothee Chalamet, Chris Cooper, Laura Dern & Meryl Streep. Gerwig–who also penned the script–also does some reading between the lines when it comes to the lead character, Jo. The studious, tomboyish writer gets a genderqueer twist in this one, which makes us wonder why it took so long for someone to come up with the idea at all.

For a real thrilling experience the likes of which this year’s blockbusters like Rise of Skywalker, Dark Phoenix and even Avengers: Endgame don’t even come close to matching, make a date for 1917. Director Sam Mendes (American Beauty, Skyfall) traces the journey of two British soldiers on as the deliver a message at the height of World War I. Filmed to imitate one continuous 2-hour shot, watching the film feels like a ratchet, ever-tightening with drama. Out actor Andrew Scott (Fleabag, Sherlock) also has a fine turn as an army captain, showing off his range in one of his most prestigious roles to date. 1917 is one of the year’s best films.

The Stream: Into the Dark – Midnight’s Kiss

For a stronger and much sexier snack this week, get ready to ring in the new year with a few screams courtesy of this horror anthology series on Hulu. Midnight’s Kiss stars Scott Evans as Joel, the leader of a group of horny friends who jet off to Palm Springs for New Year’s Eve. To add some spice, the group decide to find hot strangers to kiss at midnight. Little do they know they have a killer in their midst. Midnight’s Kiss would warrant watching just for the great-looking cast, many of whom spend a good scene or two in the nude. Moreover, it offers some fun thrills for the holiday season, which can go a long way to cleansing the palate after a few too many Hallmark Christmas movies.

In case you–like us–need a bit of a palate cleanser after the haphazard and lackluster Rise of Skywalker, head over to Disney+ to see some lucid Star Wars storytelling. As if the Baby Yoda memes weren’t enough, The Mandalorian also has no shortage of sci-fi adventure, complex characters and far greater emotional impact. Besides, it can also be watched from the comfort of home, with or without a date, nieces and nephews or a glass of vodka-spiked blue milk in hand.

Former American Idol contestant and radio & TV personality Mikayla Gordon debuts her latest single this week, the holiday-themed “Sugar & Spice.” As the title suggests, it’s a cheeky, sensual tune that showcases Gordon’s jazzy voice, and helps set the mood for some holiday love. Lyrics like “I’ve been a naughty girl” and “It just isn’t Christmas without your kiss” can provide a little inspiration for running into a handsome beau while doing some last-minute shopping or at that holiday party. Get a number, and offer up some sugar and spice. Chimney stuffing jokes remain optional. 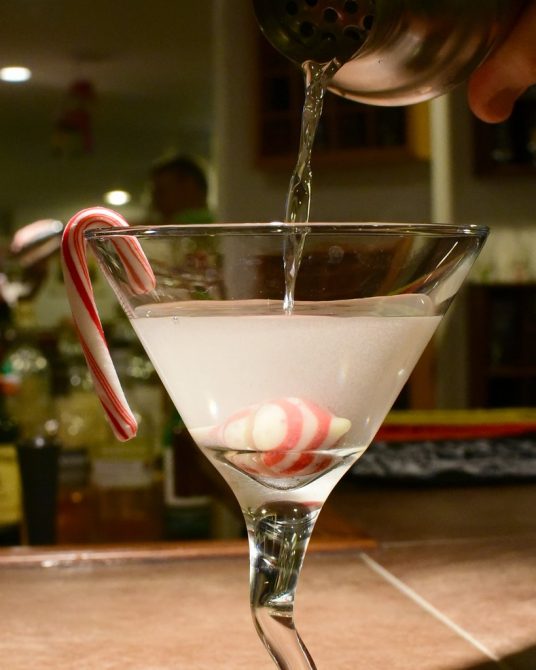 To add to the holiday cheer, freshen the breath, or just numb yourself from Trump-loving family, try this minty-crisp martini this holiday season. Given the potency of this one, we recommend staying off the apps while sipping.

Mix over ice in a shaker. Shake well. Serve in a martini glass with a candy cane garnish.