The Step Out: Before Stonewall

Pride month continues, and with it, a look at the history of the queer community. This year marks 50 years of the LGBTQ rights movement since the uprising at the Stonewall Inn. How did the community survive before that? Before Stonewall examines the question and—much like The Lavender Scare earlier this month—paints a picture of a discreet but present community dating back to the earliest days of the republic, and beyond. In honor of the 50th anniversary of the Stonewall Uprising, this Emmy-winning doc has undergone a careful restoration and lands back in select theatres this week. It’s worth a visit to the cinema to discover the untold history of the community.

The Sing Along: Cinderella

The classic Disney animated feature comes to Blu-Ray with a special restoration, new special features, and all the joy still intact. Since we know all of you already know the words to the songs (don’t deny it), pop in this disc and take a journey back to childhood, revisiting those fantasies of meeting a handsome prince at the ball (don’t deny that one either). The crazy part is that kids today can now watch the movie with great grandparents that also grew up on it, not to mention any configuration of queer relatives. We also love the oh-so-slightly gay relationship between Jack the tailor mouse and Gus, his rather slow sidekick also reminds us of a few couples we know. Pop the popcorn and enjoy. Wearing glass slippers while doing so remains totally optional.

Hot on the heels of Arthur’s Mr. Ratburn marrying his boyfriend, Bravest Knight arrives on Hulu, raising the bar even further on introducing queer characters in family-oriented programming. The show follows the adventures of Nia, a young girl training to protect her fairytale kingdom as one of the great knights of the land. She gets an introduction from her dads Sir Cedric, who followed a similar path to become a knight and Prince Andrew. TR Knight and Wilson Cruz star in the adaptation of queer author Daniel Errico’s children’s book in a show tailor-made for dads and guncles who want to spend some quality time with the kids.

HBO just offered up a gift for Pride Month in the form of making this new series about teens navigating their sexual identities free to watch. Zendaya (Spider-Man: Homecoming) leads a cast of up-and-comers that include Storm Reid (A Wrinkle in Time) and Jacob Elordi (The Kissing Booth), as well as vets like Alanna Ubach (Legally Blonde) and Eric Dane (Gray’s Anatomy). Recovering addict Rue (Zendaya) returns home after rehab to all the usual perils of high school and undergoes a sexual awakening with the rest of her classmates. Euphoria touches on a number of queer issues, and also includes the pivotal role of Jules (played by Hunter Schafer), a transgender girl who becomes besties with Rue. It’s Degrassi uncensored, which makes it all the more real, and just as addictive.

The Restored: Paris is Burning

The seminal documentary which brought to light the drag ball scene literally 30 years before Ryan Murphy got his hands on the topic gets a special restoration and theatrical showings for pride month. Director Jennie Livingston captures the eccentricity of the scene that inspired both Vogue and Pose, as well as the ravages of AIDS at its apex as well as the extreme violence that transgender women face on a daily basis. Absorbing and by turns both hilarious and devastating, Paris is Burning should be required viewing for anyone interested in queer history, a future that in many parts of the world is, for better and worse, very much alive to this day.

New from Shout Factory, that curator of amazing Blu-Ray restorations, comes the 25th Anniversary edition of this classic of queer cinema. Jeffrey follows the romantic struggles of its title character (played by Steven Weber) as he wrangles with questions of intimacy at the height of the AIDS crisis. Imagine a time where the joy of sex came with the possibility of sickness and death, and you might start to understand his predicament. Yet as somber as the premise sounds, Jeffrey is actually a delightful comedy. At times, it’s downright hilarious thanks to the work of Patrick Stewart as Sterling, a bitchy theatre queen. Weber and Stewart deliver two of their best performances, and though time has rendered portions of the film less relevant, it still has enough good humor to warrant a watch.

The Camp Out: Can’t Stop the Music

Speaking of Shout Factory, this week the label drops this other bit of queer cinema history, though we’re loath to call it a classic. Cant Stop The Music tried to transplant the disco craze of The Village People to the big screen as a musical. The resulting film, however, arrived at the height of the anti-disco blowback and as one of the worst movies ever made. So why check it out? The movie does feature some fun music and campy laughs, as well as the high spirits of Valerie Perrine, a post-Olympic Caitlyn Jenner (then known as Bruce) and a roller boogieing twinkie Steve Gutenberg (yes, really). The new disc also features an insightful and very funny commentary track from Bruce Vilanch, who co-wrote the script, and documentarian Jeffrey Schwarz, director of I Am Divine, Tab Hunter Confidential and The Fabulous Alan Carr. By no means a good movie, Can’t Stop the Music still manages to be a good time.

The Holy: The Gospel of Eureka

We already reported on this inspiring documentary earlier this year. Now it comes to PBS June 24 in honor of Pride Month. The Gospel of Eureka examines the town of Eureka Springs, Arkansas where a long-running Christian Passion Play has long drawn a tourist crowd, as has the local drag bar. When tempers flare over proposed bathroom bills, the LGBTQ residents of the city band together to fight back against discrimination…with a twist. The Gospel of Eureka may not offer answers in the clash over who pees where, but it does offer a dose of warmth in a trying time.

The Sip: The Glass Slipper 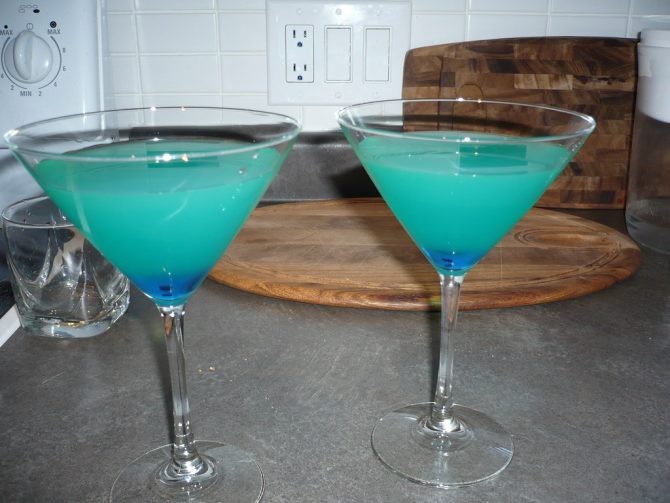 In honor of Cinderella coming to Blu-Ray, try this clean and tart martini variation, which will also have you clambering to be someone’s fairy godparent.

Simply add ingredients to a cocktail shaker over ice, shake, and serve in a martini glass.