Since we know you’re probably going to slurp it up anyway, we’d like to remind you all that Stranger Things, the popular Netflix sci-fi/horror series returns this July 4. Season 3 finds the kids enjoying the town of Hawkins’ new mall, and facing off against a sinister creature that has managed to escape into our world. Personally, we’re hoping for Barb to return this season, or, failing that, a romance between town hunks Steve (Joe Keery) and Billy (Darce Montgomery). We’d watch.

After a long hiatus, the final season of the revered queer dramedy premieres this week on Dekkoo. Season 3 finds the ever unlucky in love Nate (Perry Powell) meeting a handsome older man, and facing questions about his future in West Hollywood. Similarly, his friends also grapple with issues of dating, monogamy, sexual openness and life in showbiz. Few web series have treat their subject matter with the kind of thoughtful maturity and frankness as I’m Fine. We’re glad it’s getting a final season to take a proper bow.

The Restored: The Queen

Long before Paris is Burning and Pose set our hearts afire, another documentary shined a light on beauty contests in the drag scene. Filmed in 1967 (!), The Queen documents The Miss All-America Camp Beauty Pageant, a competition of drag queens and trans women overseen by Andy Warhol. Almost forgotten as a work of cinema, The Queen has undergone a full restoration and lands in theatres to cap off Pride Month with a dose of little-known history. It’s a must-see for fans of drag, or anyone who wants to know the history of the community.

In theatres in New York June 28, with nationwide rollout in select cities to follow.

The Sing Along: Kinky Boots: The Musical

Also giving June a send-off with a hearty dose of fabulosity, Kinky Boots, the beloved musical by Cyndi Lauper and Harvey Fierstein, comes to cinemas for a special run. This filmed version of the West End production features the two London leads—Killian Donnelly and Matt Henry—reprising their roles as Charlie, the heir to a shoe factory and Lola, a drag queen with a knack for designing fabulous boots. The two form an unlikely friendship and plot to save Charlie’s family business by designing a line of boots that will appeal to drag queens. Featuring a heartwarming story and some terrific music, the filmed production captures most of the magic of the stage version, and makes us hope for a proper film version in the near future.

The Fabulous: Drag My Dad

Bob the Drag Queen hosts this new makeover show which aims to help young people bond with their fathers…via the magic of drag. Each episode features a dad getting a full-on drag makeover, and some bonding time with the kids. Bob injects his signature humor into the proceedings and acts as drag mom to some middle-aged men not afraid to try new things in the name of fatherhood. After all, what could be more fun than giving your dad breasts made of lentils?

Out-queer recording artist Dexter Driscoll just dropped his latest single, “Rendezvous” about the quiet yearning of hiding a queer relationship from the public eye. The single also furthers Driscoll’s style of mixing Lana Del Rey-type introspective lyrics with electronic beats reminiscent of Todrick Hall, while the video from the song features sexy imagery that channels both passion and isolation. In short, give it a listen for some sensual listening…with or without company.

The Sip: The Upside Down 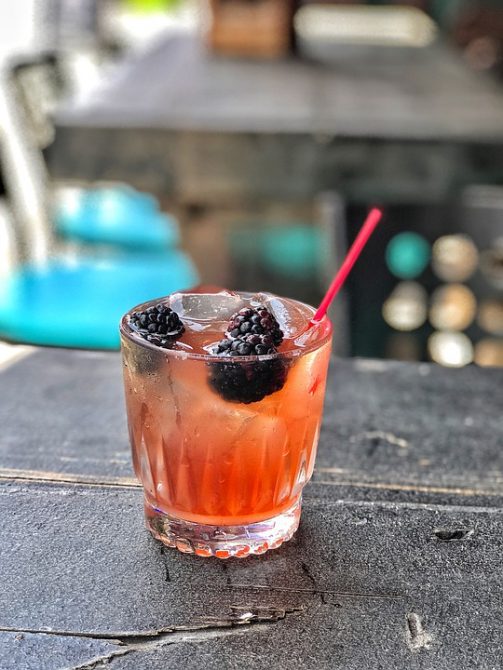 In honor of Stranger Things have a sip on this sweet berry cocktail with a vodka base. It makes for colorful sippage on any occasion.