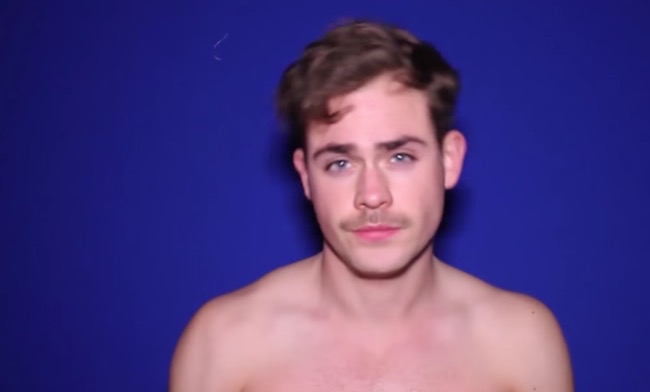 One of the best things to come out of Stranger Things 2: the discovery of actor Dacre Montgomery, who inhales his role as bastard bully Billy; he of the bulging pecs and horrific hairdo.

Now, the actor has bravely shared the way-out-there audition tape that landed him the plum part.

He alluded to the tape back in March, when he suggested a sizable chunk of the audition featured him jiggling and gyrating in a flesh-colored G-string on his own behest, and dancing to ’80s music with the requisite leather jacket and buggy shades.

Well, now he’s released the audition tape — and while it does feature him shirtless, we feel a little cheated and deflated that there’s no flesh-colored G-string in sight.

That said, the audition is still very out there.

“I did a play in high school,” Montgomery tells GQ, “and that’s the only reason I had this nude-colored G-string.”

I think Billy’s kind of unpredictable nature, it’s not like me. It’s obviously not like me to get in a G-string and do that, so I was like, ‘What wouldn’t Dacre do?’

And I was like, okay, what better way to do that than to oil myself up, put on a G-string and… yeah.”

Yeah, and obviously that’s about 50 words too many as far as G-string justification goes… and not nearly enough explanation as to why that footage is excised from the tape he eventually shared with GQ.

Frankly, it’s rude and selfish of Montgomery to decide the tape is too hot to handle… that’s for the discerning public to decide.