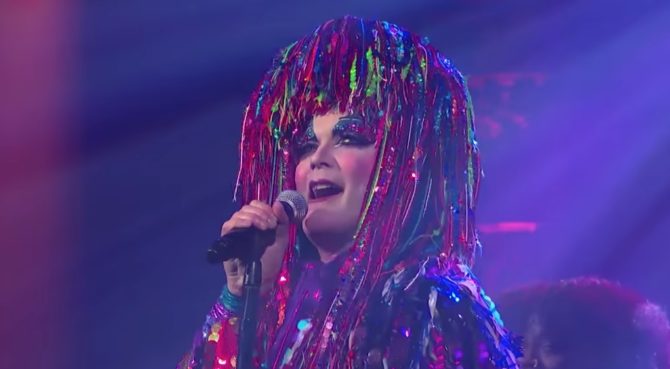 Drag sensation, performance artist and MacArthur ‘Genius’ Grant recipient Taylor Mac stopped by Stephen Colbert’s The Late Show on Monday, where judy reminded the audience that queer people have been around throughout every step of history.

Oh, Mac also explained that ‘judy’ is judy’s preferred pronoun: “Judy is my gender pronoun. I choose judy because I wanted a gender pronoun where if anyone roll their eyes it would immediately make them camp…you can’t say judy without emasculating yourself.”

Mac has been touring an incredible 24-hour show featuring popular music from every one of the last 24 decades, weaving together American history with queer history. If that sounds ambitious, it is.

“Sometimes when we’ve toured it we’ve done four six-hour shows over the course of two weeks but we did do a 24-hour concert from beginning to end about two years ago,” Mac said.

Mac started doing the show before Trump was elected, however, and Colbert asked whether the current president would make it into future performances.

Mac had quite an amazing answer:

Then Mac performed Patti Smith’s “People Are The Power” after explaining, “I think until justice gets back into the world we should just be singing that to close every show.”

Watch the interview, followed by the performance, below: