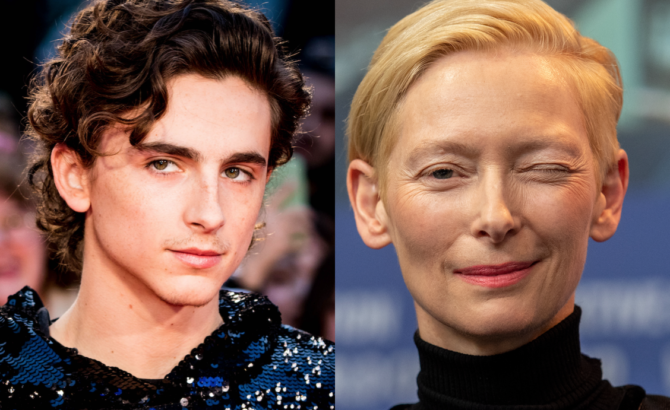 A new, symmetry-celebrating feature from writer/director Wes Anderson may still be months away, but you won’t have to wait that long to witness a special moment between two of its stars.

The French Dispatch premiered this week at the Cannes Flim Festival, and stars Timothée Chalamet, Tilda Swinton, Bill Murray, Owen Wilson, Adrien Brody, Stephen Park, and Benicio Del Toro were all there to mark the event.

You may have seen a sweet red carpet moment make the rounds, with Chalamet tenderly resting his head up on Swinton’s shoulder as the pair hold hands:

We Need To Talk About Timothee and Tilda. #TimotheeChalamet #TildaSwinton pic.twitter.com/u4qvCfrliL

The film received a standing ovation, with the crowd roaring for over nine minutes to applaud Anderson.

Somewhere during that ovation, Swinton executed an old, tried and true prank on Chalamet, taping her name tag to his back as he made his way to the stage.

Related: Oscar-winner Tilda Swinton on finding her very own “queer circus” in Hollywood

The moment was captured and shared by Variety‘s executive editor Ramin Setoodeh, and we thank her for it:

Look at what Tilda Swinton did to Timothee Chalamet during ‘The French Dispatch’ standing ovation. #Cannes2021 pic.twitter.com/MNmkzdUktA

The French Dispatch was originally slated to premiere at the 2020 Cannes Film Festival, but was delayed due to Covid. It will be released in theaters on October 21, 2021.

Check out the trailer: