The Must: The Boys in the Band

At long last, the highly-anticipated remake of the seminal queer text has arrived on Netflix. The Boys in the Band premiered as an off-Broadway play in 1968, with a film version following two years later. Since then, the play and subsequent film version have remained hotly contested. Some see the work a groundbreaking affirmation of gay life, while others consider it an exercise in homophobia. Now director Joe Mantello (Wicked) and an all-gay cast bring the script to life again. We’ve seen the new film and found it very well acted, not to mention vastly superior to the original film version thanks to some key revisions by Mart Crowley, who wrote the original play and this screenplay version. Part historical artifact, part actor’s showcase, everyone on the LGBTQ spectrum should check it out.

The Unexpected: The 40 Year Old Version

Lena Waithe produced this quirky comedy about a former playwright turned writing teacher going through a midlife crisis. Radha Blank wrote, directed and stars in the film as Radha, a creatively unfulfilled woman struggling to find work. When a chance meeting reveals a gift for beat poetry, she resolves to find a new life…as a middle-aged rap artist. Always interesting and downright hilarious at times, we found its mix of observations about neurosis and the art life original and very smart. Blank gives a splendid performance in the leading role, as does actor Peter Kim, as Radha’s longtime manager/high school boyfriend/gay bestie.

The Moving: For They Know Not What They Do

Director Daniel Karslake’s semi-sequel to his documentary For the Bible Tells Me So arrives on VOD and DVD this week after earning wide acclaim on the festival circuit last year. For They Know Not What They Do examines the effect marriage equality had on religion in America, and how the religious right has renewed attacks on queer people. And, as with For the Bible Tells Me So, Karslake searches for a kind of reconciliation between faith and sexuality—the notion that faith has a place in the lives of LGBTQ people, and vice versa. Tender and at times excruciating by design, the film is a welcome call for peace amid cultural warfare.

Creator Scott Cullen’s new web series has arrived in full on YouTube this month—one of the first web series filmed entirely during the COVID-19 pandemic. Cullen plays Hayden in the series, a gay millennial trying his best to survive adult life amid the aforementioned pandemic, the maze of hook-up culture, and an overbearing family. As with just about everything filmed during the pandemic, Happy features actors talking to one another over video chat, which leads to occasional awkwardness in the drama. That said, Cullen has a relatable everyman quality to him, and the show’s observations about dating—particularly during lockdown—strike a chord, enough so that we think it worth a look.

The Fierce: The Bald and the Beautiful

Normally, we don’t do much with podcasts here at Culture Club. That said, we cannot ignore a new audio show from Drag Race alumni and all-around forces of nature Trixie Mattel and Katya. The Bald and the Beautiful, as with all of Mattel and Katya’s collaborations, finds the pair riffing on pop culture and beauty standards with acidic and often self-deprecating wit. It’s a must for Drag Race fans, or for anyone that needs some fun listening during a workout.

The (Virtual) Destination: Atlanta’s Out on Film

The cavalcade of virtual queer film festivals continues, this time with Atlanta’s Out on Film Festival. This year’s fest sees actress/comic/goddess Margaret Cho take home the festival’s special Icon Award, and writer/director Del Shores hosting a special showing of Sordid Lives. Moreover, the festival also offers a chance for audiences to see some of our favorite queer films on the circuit this year: The Capote Tapes, Breaking Fast, Ahead of the Curve, Monsoon, Through the Glass Darkly, Cicada and Dramarama all show as part of the lineup. Grab the popcorn and a ticket.

Tickets available via Out On Film.

The Sip: The Social Distance 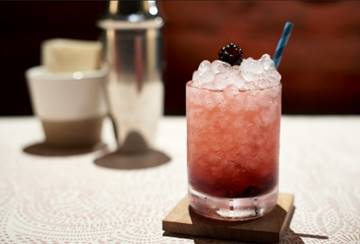 The good folks over at SKYY vodka sent us the recipe for this cocktail. Sunday marks National Vodka Day (who knew?) and given the ongoing need for social distance, we thought this simple, sweet berry libation all too appropriate given the times. Sip with any of these titles playing, or whilst just hanging around the house.

Crush blackberries and combine in glass over ice.