Following in the tradition of last year’s Halloween sequel/do over which omitted decades of abysmal sequels from continuity, the Terminator franchise attempts to do the same. It also takes a cue from Halloween in bringing back the real star of the original film: Linda Hamilton. At 63, the actress returns to a full-blown action role, fighting killer robots from the future and trying to protect a woman who is the key to surviving global annihilation. It’s not exactly groundbreaking, but watching Ms. Hamilton—lesbian sex symbol & the mom every gay boy wanted—back in action, makes the movie worth a watch.

Netflix continues its triumphant reboot of She-Ra, already in its fourth season. Jacob Tobia joins the cast as Double Trouble, a shape shifting villain who defies gender and pledges to destroy She-Ra and the Rebellion. Meanwhile, Gilmmer struggles to cope with becoming Queen of Etheria, as Adora/She-Ra uncovers a dark mystery involving the Ancient Ones, and Catra takes charge of the Horde, determined to kill Adora. It’s a soapy, sexually-fluid adventure, and still one of the best on TV.

Author Andre Aciman teases the upcoming release of Find Me, his sequel to Call Me By Your Name. As a fun tease, Aciman has put together a streaming playlist of songs that inspired—or were inspired by—the original book and new sequel. Even better, listeners can get hints as to the upcoming plot from Aciman himself between the tracks. Artists include Sam Smith, Sufjan Stevens and the Psychedelic Furs among others. It’s a great way to fall in love with Elio & Oliver’s love affair once again.

The new Brazilian comedy Cousins has all the trappings of a vanity project: writer/co-director Thiago Cazado also stars in the film, his second feature. Yet Cazado and his co-director/cinematographer Mauro Carvalho have a totally even-handed approach to the material. The story: a young closeted pianist named Lucas (Paulo Sousa) has his life turned upside down when his distant cousin Mario (Cazado) arrives to spend a week at the house…while their aunt is on a religious retreat. Having just gotten out of jail, Mario has a very different outlook on life from Lucas, and the tension grows from there. Cousins isn’t a cinematic milestone, but it is so deliberately silly, so sweet by design that it becomes impossible to resist. Like a queerified Hallmark movie, Cousins enchants the viewer with a super-perfect storybook romance—and a surprisingly sensual one at that. It’s wonderful to see a movie this sweet also treat its sex scenes—which include some very graphic nudity—with true eroticism; the kind of electricity that comes from two people madly in love. Straight people get preposterous rom-coms all the time. Its high time the rest of us got one of our own.

Opens in Los Angeles November 1. A national rollout will follow.

The Quickie: A Halloween Trick

Cult horror screenwriter Michael Varrati continues his transition into directing with this short film, a queer meditation on Halloween and horror tropes. A Halloween Trick walks the fine line between horror and comedy as a woman with a nasty case of insomnia comes into conflict with her sexually voracious gay neighbor. Horror and hilarity ensue, along with a few wry observations about modern gay life. Besides, who hasn’t had the occasional complaint for being too loud during sex? Or is that just us?

The Stream: Man Made

Director T Cooper’s awesome documentary about transgender male bodybuilders finally comes to streaming this week. Man Made picked up the the Best Documentary award at Outfest 2018, and with good reason: it shines a light on the transmasculine struggle—a subject hereto almost totally untapped by cinema. Cooper follows several transgender men as they prepare for a bodybuilding tournament, each of them at various points in transition. Man Made puts masculinity—all masculinity—in new perspective as well as the transgender experience, fusing both with the excitement of a sports movie. That makes for an exhilarating—and fascinating—viewing experience. 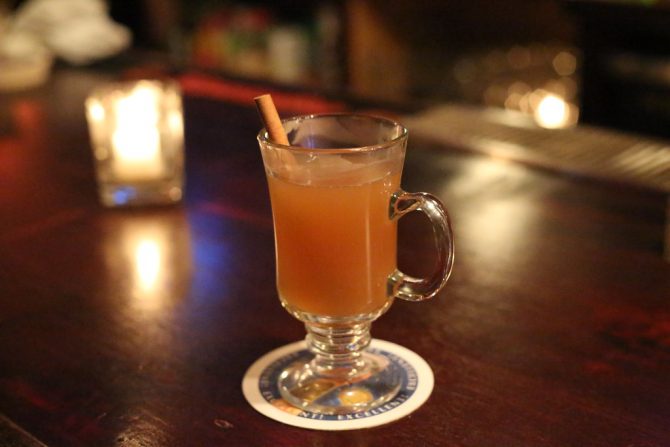 Celebrate the beginning of fall (not to mention extra sleep from turning back the clock) with a seasonal delight that combines the unique taste of autumn with a bit of decadence designed to fight the chills. It’s great for sipping alone, or with a bit of company.

Heat cider in a mug in the microwave. Add rum to taste. Garnish with cinnamon stick.