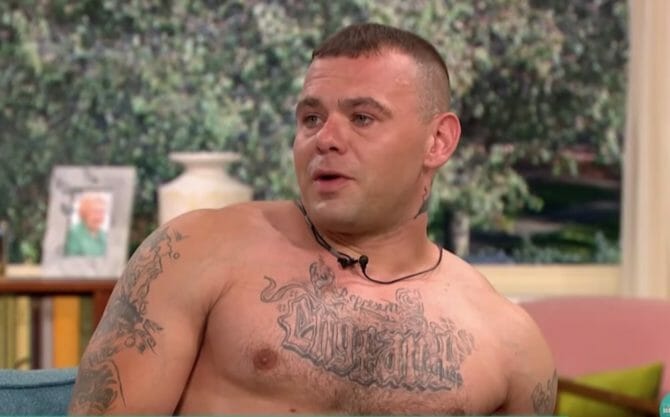 This Morning is the British equivalent of The Today Show, and this week they featured an incredibly important segment on *straight *male toplessness.

Let’s be clear about what guest Jamie Richardson was advocating for: the freedom for men (“it doesn’t matter if you’re big, you’re skinny, black white” just not a woman) to take off their shirts in public.

And look — we’re all for showing some skin, but Jamie’s yearning for liberation is awfully… limited.

Related: Meet the gay teen who hopes to unseat his virulently homophobic Ohio legislator in November

Because despite the irony of pushing for his own shirtlessness while disapproving of all people enjoying the same freedom, he also thinks the entire debate is moot so long as “you’ve got transgender people, men marrying men, men going to the same toilet as women.”

But the surprising part of the segment isn’t Jamie’s tired viewpoint, it’s the way the three other people in the conversation react.

Hosts Eamonn Holmes and Ruth Langsford had the opportunity to dig in when Jamie let his true colors show, but instead, Langsford fired back with this searing follow-up:

“So Jamie, say you were on a train and you think ‘Oh I’m a bit hot in here,’ and you took your top off and there was somebody sitting there with their children and they said ‘Actually do you mind not doing that’?”

You can watch the entire uninspired thing below, or skip to the 2:30 mark to see the homophobia and transphobia play out:

Needless to say, viewers aren’t thrilled with the segment:

Why r @thismorning letting people like this moron on tv. His comments about transgender and gay people is ridiculous. If u work that hard u prick u can afford to buy a top and maybe buy urself an education while ur at it #ThisMorning https://t.co/jbCbCkBa1n

What is with this shirtless man on #thismorning trying to bring trans, gays and enbys into this argument??? Leave us out of this I don't wanna take my shirt off no matter how I'm presenting 🙁

“There’s men marrying men so if I want to walk down the street with my tshirt off I will” homophobic comment right there and Eamon/Ruth never flicked an eye lid. Wow #ThisMorning @thismorning