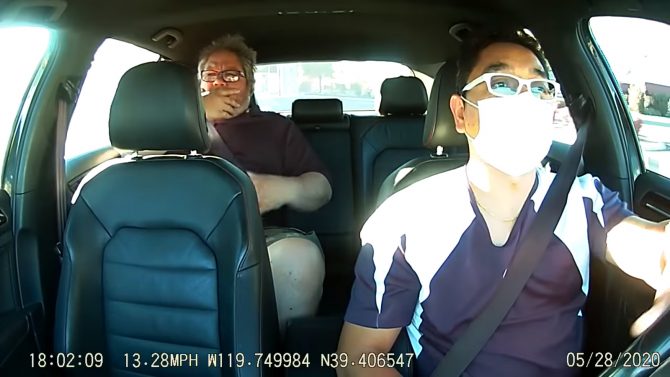 An altercation between a Lyft driver and his passenger has gone viral. The footage shows the passenger berating the driver with racist and homophobic remarks. To make matters worse, the passenger also refused to wear a mask.

The video, taken on May 28, begins with an exchange between Edgar, the driver, and Richard, the passenger, over the issue of the mask. Edgar asked if Richard could cover his face with his shirt if he didn’t have a mask.

“You believe in that sh*t?” Richard asks, balking at the request.

Edgar goes on to explain that he has family members sick with COVID-19. Richard covers his face with his hand, presumably as a compromise. He then explains why Edgar shouldn’t believe the government. Edgar reiterates that he knows people sick with the coronavirus, that the pandemic is real.

“I’ve never heard of someone asking me to wear a mask,” Richard grumbles.

“It’s because we’re really close in the car,” Edgar points out.

Richard then complains about the route Edgar has selected, before adding insult to injury. “I don’t like you,” Richard says.

Edgar offers to let Richard out, but he refuses. Edgar then orders Richard out of the car, saying that he’s terminating the ride. Richard still refuses to leave.

Richard then calls Edgar a “candy ass fa*got with white glasses” and boats that he could  “crush [his] f*cking skull right now.”

Richard then proceeds to alternate between begging Edgar to drive him the rest of the way home and mocking Edgar’s accent. Then the racist slurs being, with Richard calling Edgar a “wetback.” Richard then boasts that he has fought for the country, and insists Edgar can’t be an American because of his accent.

on the menu
10 comments

rumor has it
13 comments