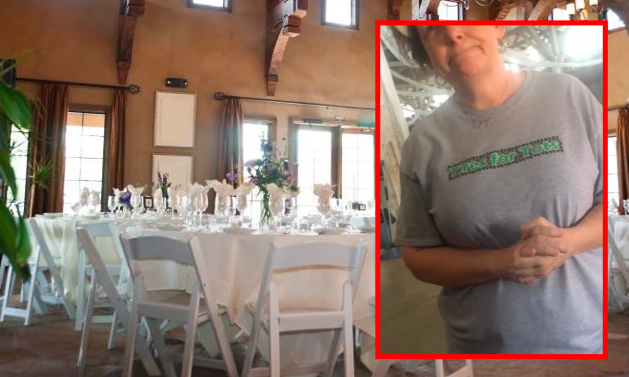 An employee from a wedding venue in Mississippi was caught on tape telling a woman that her brother, who is black, couldn’t marry his fiancée, who is white, at the popular reception hall because of — you guessed it! — Jesus H. Christ.

LaKambria Welch posted the video on Facebook over the weekend. In it, a woman at Boone’s Camp Event Hall, located in Booneville, Mississippi, says the venue doesn’t permit certain couples to get married, citing her “Christian” faith for the reason.

“FYI, if you’re a mixed-race couple, please do NOT inquire Boones Camp for a wedding venue” Welch wrote. “They will not accommodate you if you’re ‘gay’ or ‘mixed race’ due to their ‘Christian beliefs.'”

In the video, the woman, dressed in a fashionable Tires for Tots promotional t-shirt, tells Welch, “First of all, we don’t do gay weddings or mixed race, because of our Christian race. I mean, our Christian belief.”

When Welch pushes back, saying that she, too, is a Christian, the woman replies by saying she’s not going to “argue” her faith then adds, “We just don’t participate. We just choose not to.”

After Welch posted the video on Facebook, it quickly went viral, racking up nearly 50,000 views, 1,000 shares, and over 1,500 comments, including some from people who had had similar experiences with the establishment.

“I was trying to find my best friend, who is lesbian, a wedding venue. I was immediately shot down when I was asked if they were okay with a gay wedding,” one person wrote and included a screenshot of their conversation. 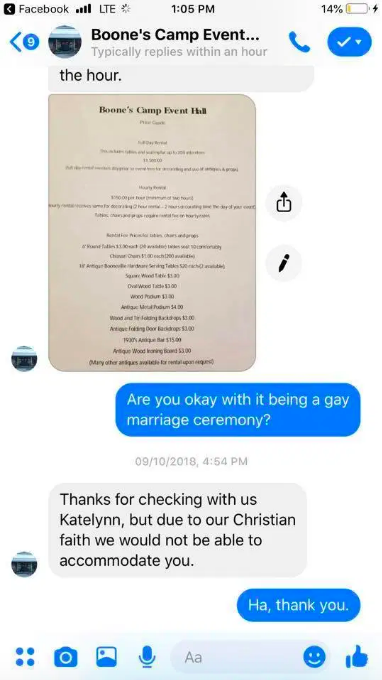 Meanwhile, the City of Booneville and the Booneville Main Street Association both released statements over the weekend condemning the bigoted business.

“(T)he City of Booneville, Mayor, and Board of Aldermen do not condone or approve these types of discriminatory policies,” a statement issued Sunday read.

Sadly, what the venue did was perfectly legal under both Mississippi and federal “religious freedom” laws.

In 2016, the Mississippi Legislature passed a “religious freedom” law allowing businesses to refuse service to LGBT people on the basis of their religious beliefs about marriage or gender. Republican Gov. Phil Bryant signed that bill, House Bill 1523, into law.

After being initially struck down in federal court, the conservative U.S. 5th Circuit Court of Appeals allowed the law to stand. The U.S. Supreme Court did not take the case.

But the law only says that the “religious freedom” excuse can be used when discriminating against LGBTQ people. It doesn’t mention anything about race.

The state government shall not take any discriminatory action against a religious organization wholly or partially on the basis that such organization … Solemnizes or declines to solemnize any marriage, or provides or declines to provide services, accommodations, facilities, goods or privileges for a purpose related to the solemnization, formation, celebration or recognition of any marriage, based upon or in a manner consistent with a sincerely held religious belief or moral conviction described in Section 2 of this act…

Section 2 then defines those beliefs as:

The sincerely held religious beliefs or moral convictions protected by this act are the belief or conviction that: (a)  Marriage is or should be recognized as the union of one man and one woman; (b)  Sexual relations are properly reserved to such a marriage; and (c)  Male (man) or female (woman) refer to an individual’s immutable biological sex as objectively determined by anatomy and genetics at time of birth.

Nowhere does it mention the color of a person’s skin.

When reached for comment by Deep South Voice, a man from Boone’s Camp Event Hall shouted “No comment!” into the phone before slamming down the receiver.