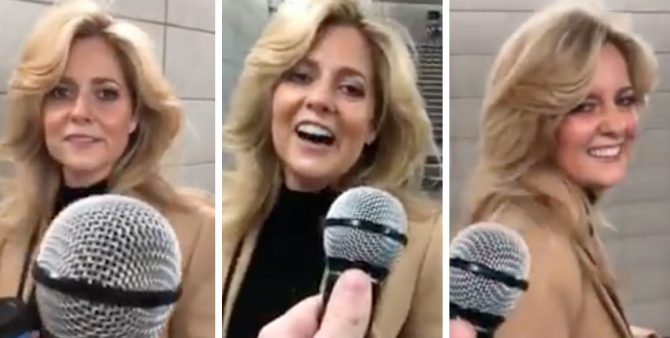 A British woman has become a viral sensation after appearing to be ambushed by a vlogger on the subway and asked to sing a Lady Gaga song.

The vlogger is Kevin Freshwater. His latest video finds him walking up to members of the public, giving them a line of lyrics, and asking them to sing the rest.

In the clip, he approaches a woman in a London Underground station and gives her a line. Little Monsters will recognize it as coming from the Gaga song, “Shallow”, from the movie A Star Is Born.

The woman also recognizes it and tentatively sings the next line. When Freshwater remarks that she’s good and urges her to continue, she lets rip with the chorus. Watch below.

This guy challenged strangers to ‘finish the lyrics’ and this woman passing by started belting out Shallow like she was performing at the Oscars, literally flawless ?

The woman concedes that she is a professional singer. Freshwater includes a link to her Instagram on his own Instagram posting. Her name is Charlotte Awbery, she lives in Essex, and going by her Instagram, she performs a lot at weddings and other private functions.

A tweet sharing the video has now had over 1million likes in less than two days and almost a quarter of a million retweets.

Related: Lady Gaga surprised an emotional gay fan & comforted him as he talked about his dad’s rejection

On Twitter, the clip has prompted thousands of comments and praise. Some love her voice.

Lady Gaga who? This literally gave me chills

Others noted her style.

Her hair is giving me lifetime movie vibes

You can watch Freshwater’s full video, in which he approaches several members of the public, below.

If you want any more convincing of Awbery’s talent, here’s a 2016 video of her covering Sia’s “Chandelier.”