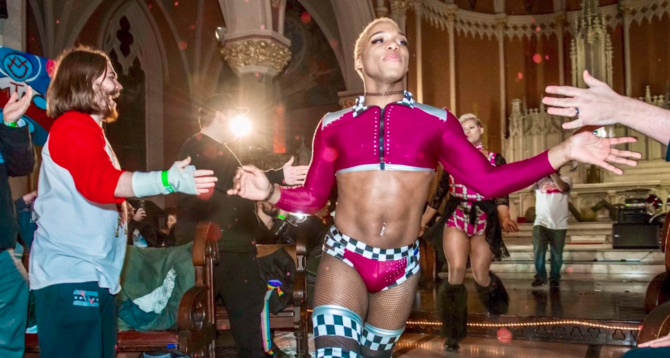 If wrestling always seemed pretty gay to you—with its campy costumes, showboating athletes, and spectacular theatrics—well, that’s because it is.

Outside of the confines of the WWE, there’s a whole wild world of queer wrestlers hitting the mat, and many of their stories are explored in filmmaker Ryan Bruce Levey’s documentary, Out In The Ring.

“You can’t really divide drag culture from wrestling the way they get into the ring, feathers and makeup and all of that,” the filmmaker tells Original Cin. And it’s true that, when you look past the traditionally masculine bravado that’s been depicted in mainstream wrestling over the years, the “sport” and drag are really just different sides of the same coin. “There is so much crossover in the realm of queer performance and wrestling,” shares one of the subjects Levey features in Out In The Ring.

As the documentary explains, the history of wrestling is filled with gay-themed characters as well as clandestine queer performers, many of whom have fascinating and heartbreaking journeys that have been seldom discussed until now. Through interviews with a number of today’s most active gay and gender-fluid wrestlers, Levey connects the past to the present, shining a light on this exciting corner of the industry that’s rapidly growing.

Out In The Ring will make its official world premiere next weekend, June 3, as part of Toronto’s own Inside Out Film Festival, the city’s premiere 2SLGBTQ+ focused festival, which will run in person and virtually from May 26 through June 5.

Check out the trailer below, and head here for more info about the film and festival.