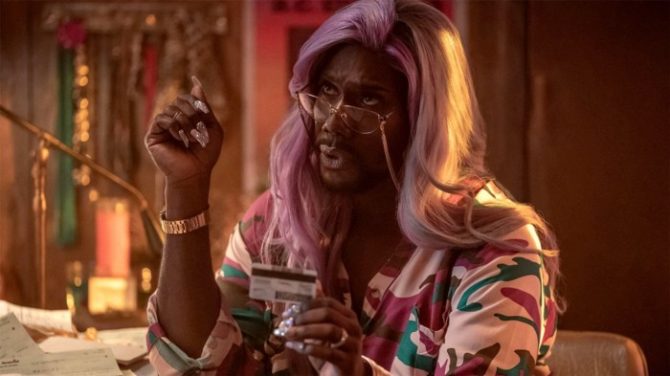 Anyone who enjoyed the outrageousness of Hustlers, take note: you need to watch P-Valley. The Starz drama draws on a similar premise–the lives and drama of strippers–and transplants it to a rural Mississippi called The Pynk. Unlike Hustlers, however, the strippers of P-Valley are working-class women just trying to make a living–there’s no robbing of wealthy men involved. The series also one-ups the film by introducing the most original queer character on television: Uncle Clifford, a genderqueer gay man that operates as a combination boss and den mother to the club’s employees.

As played by actor Nicco Annan, Uncle Clifford plays like a mix of Aibileen Clark (Viola Davis‘ character in The Help) and Michael Corleone (Al Pacino’s role in The Godfather series): nurturing and cunning, with a shark-like business sense and a raw sex appeal. Despite the hot pink wig, long nails and effeminate gestures, Clifford attacks no shortage of good-looking men. That includes the would be rapper Lil Murda (J. Alphonse Nicholson), a closeted man taken in by Clifford’s fearlessness and sensuality. It’s as if Uncle Clifford says to the world “I am everything, and I know you want to try it all.”

Count us among his admirers. P-Valley has no shortage of drama–domestic abuse, drug use, poverty, infidelity and racism all come into play over the course of the show’s first season. Uncle Clifford is the real draw, though: a refreshing and thoughtful portrait of queer empowerment. Given the involvement of directors Patrik-Ian Polk (creator of Noah’s Arc) and Kimberly Pierce (Boys Don’t Cry), we offer it up as a marvelous way to binge away the weekend. Nicco Annan just scored a Queerty Nomination for his performance–he deserves to have his name read among Emmy nominees too.