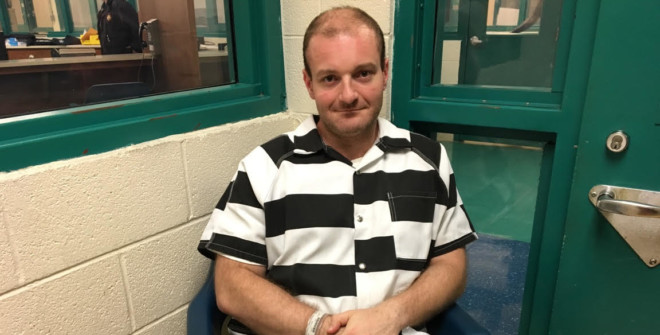 When life gives you lemons, make lemonade, right? That’s what gay-hating neo-Nazi Christopher Cantwell (a.k.a. the “Crying Nazi”) appears to be doing as he rots away inside a Charlottesville jail.

36-year-old Cantwell is currently residing at the Albemarle Charlottesville Regional Jail after being denied bond for three felony counts related to his involvement in the deadly white supremacist rally in Charlottesville last month.

Because of the whole racist, white supremacist thing, Cantwell is being kept in solitary confinement in a segregated area (a.k.a. “Seg”), which we’re sure he’s happy about.

He recently launched a prison radio program called “LIVE from Seg!” Since the jail doesn’t actually have a recording studio, Cantwell has come up with a creative alternative. He calls his friend, Jason, who records their conversations then uploads them to YouTube.

“Jason is a guy who picks up the goddamn phone when I call him, which I cannot say for everybody else,” he tells C-Ville Weekly  “Jason picks up the phone. Jason records the calls. Jason sends them to the guy who’s running my website, so Jason is helpful to me in that he insists on my voice being heard.”

Cantwell, who describes himself a “political prisoner,” estimates that around 10,000 people listen to his prison radio program each week. YouTube’s tracking system, however, suggests a slightly lower listenership. Most of the videos have between 700-800 views.

Related: Christopher Cantwell, a.k.a. the sobbing neo-Nazi, surrenders himself to police

When he’s not ranting and raving to Jason on the phone, Cantwell says he’s reading Hitler’s book Mein Kampf, which someone anonymously mailed to him. But he insists that doesn’t make him a Nazi.

“I’m not a Nazi,” he says. “I came down here because I think that I f*cking have rights and that I don’t deserve my f*cking race to be exterminated from the planet,” adding that not everyone who’s “skeptical of Jews” is a Nazi.

That, Cantwell says, it totally “worth crying about.”