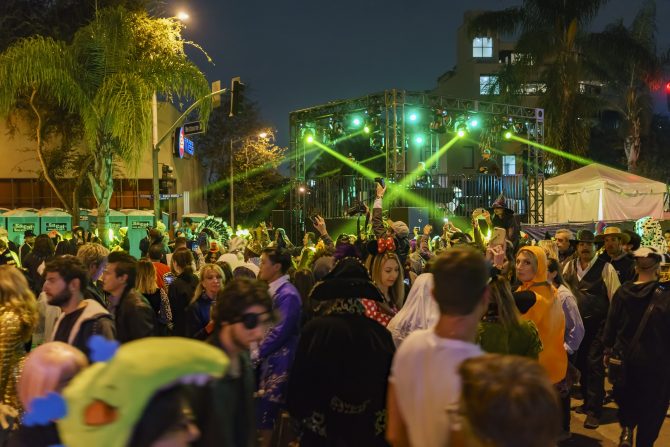 The coronavirus has claimed another queer event, understandably. The city of West Hollywood has announced that its annual Halloween Carnival is cancelled over fears of the virus.

Afraid that a spooky night could aid a real horror show, the city council nixed the festival–one of the longest-running and most popular Halloween celebrations in the nation–over health and security concerns. Weho Times reports that city managers worry that a potential spike in COVID-19 cases and additional social distancing measures would require extra security, and that the cost of putting on the carnival would balloon.

“We want to look at events from both a health and safety perspective and also an economic perspective as we go into a deep dive with next year’s budget with some initial fiscal challenges,” city manager Paul Arevalo remarked during the online meeting. “If we were to cancel the major events going up through December 30th and the two big events would be obviously LA Pride at 3 million, and Halloween at 2.4 million and there other events as well, but the cost of those events would be in the neighborhood of 6 million dollars.”

City Council member John Duran echoed that sentiment in a Facebook post. “The thought of gathering 500,000 people on Santa Monica Blvd during an ongoing pandemic was just not possible,” he wrote. “I did ask that we consider having Halloween still occur within nightclubs and bars with proper social distancing and face coverings. It’s the new reality for this year. And actually, maybe Halloween will become once again a gathering for Wehoans and our friends as a community – rather than playing host to all of Los Angeles County. The Halloween spirit will continue. Just a lot slimmer than years past. And you know what – maybe more of ‘just us’ who live, work and play here?”

The Halloween Carnival joins the likes of the Dyke March, Trans Pride and AIDS Lifecycle as one of West Hollywood’s major city events canceled due to COVID-19 worries. At the moment, LA Pride, scheduled for early June, remains postponed, though it will likely see formal cancellation in the future.