This is the fourth in a series of “Then & Now” articles looking at historic places that have made New York the cradle of LGBTQ life from Stonewall to today at Pride 50. 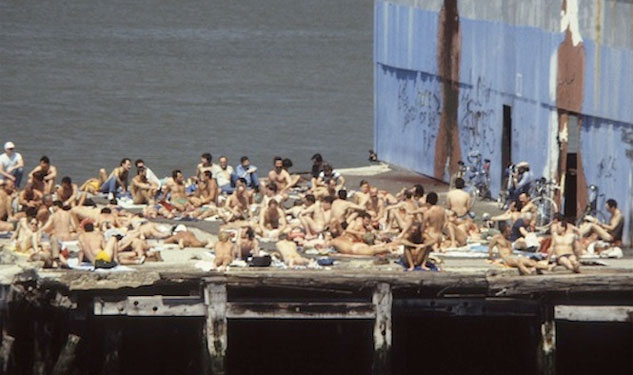 By the 1960s, the massive piers along Manhattan’s Hudson River waterfront that projected into the water stood largely abandoned and easily accessible from Greenwich Village, which gay men were beginning to take over. The city’s trans-Atlantic shipping industry had moved north, and this happy confluence of events made the piers an attractive venue for hanging, cruising, and hooking up.

In the ’70s and ’80s, the piers became a popular spot for gay men to sunbathe naked beneath huge murals by artists like Gustav “Tava” Von Will. As writer David Cohen noted in a review of the Leslie-Lohman Museum’s 2012 exhibition “The Piers: Art and Sex along the New York Waterfront”: “Post-Stonewall and pre-AIDS, and at a time of social liberation and economic distress – the rapidly decaying wharfs and docks on the West Side below 14th Street were the site of unprecedented sexual and artistic experimentation.”

Photos from the period show young men lounging on the crumbling, weather-beaten structures. What this space lacked in comfort and amenities for intimate liaisons, it made up for by providing the anonymity gay men required at the time to survive. At night, the darkness of the ruins was a seduction, not an obstacle.

The piers also became a refuge for homeless LGBTQ youth. For years, they were one of the few places in the city they could go to hang out with others like themselves – and often their only available shelter. 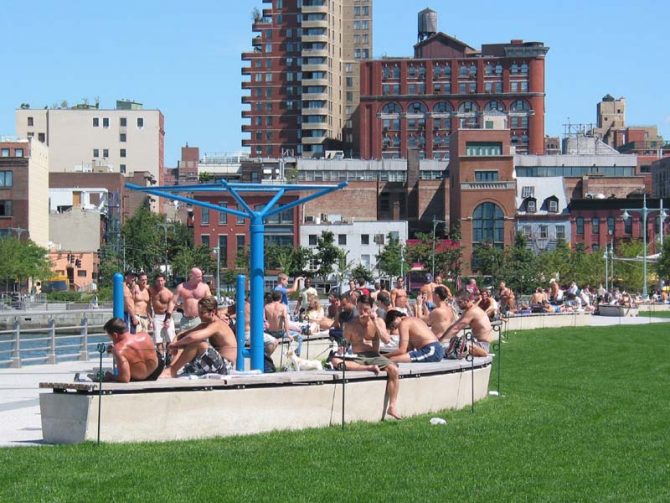 Today, in a time of urban gentrification, the piers would be virtually unrecognizable to those who prowled them 40 years ago. Beginning in the late ’90s, many were redeveloped and incorporated into the gorgeous new Hudson River Park, extending along Manhattan’s West Side Highway from the Battery to 59th Street.

Pier 45, generally known as the Christopher Street Pier, remains a popular queer hangout. Where previous generations once stretched out naked on concrete slabs, a grassy lawn now juts into the Hudson River, overtaken by shirtless men.

During the summer, it becomes prime real estate for sun-worshipping queers, some of whom strip down to the tiniest $200 Charlie by MZ or Parke & Ronen bikinis they can wear without getting a citation for public indecency. Further up the river, around West 12th Street, stands the city’s first official monument to the LGBTQ community. Nine boulders, modified by Brooklyn artist Anthony Goicolea, stand in a circle, commemorating the lives of the victims of the 2016 Pulse Nightclub massacre.

And despite efforts to limit their access to the neighborhood by wealthy white residents, queer and trans teens of color still flock to the Christopher Street Pier. It remains a haven for homeless LGBTQ youth, as depicted in Elegance Bratton’s 2013 documentary Pier Kids: The Life.

Meanwhile, NYC Pride pays tribute each year to the history of the city’s community by staging several of their official events on various piers. Over the years, what was once known as The Dance on the Pier, the Sunday night culmination of the city’s official Pride events, has morphed into Pride Island, three days of music, dancing, and entertainment taking place this year on Pier 97, where men found new ways of being intimate and finding joy in each other.

What goes around comes around.