In 2016, Christian vlogger Austin Null was an influencer on the up and up. He had over 350,000 YouTube subscribers who tuned in every day to watch him and his wife, Britt, and their three young children do things like pray, go grocery shopping, do craft projects, and attend church.

They painted themselves out to be a hip but wholesome mixed race family that represented the future of Christianity in America and they amassed a huge number of views in the process–over 80 million, to be exact.

On December 30, 2016, the Nulls posted a since-deleted video titled “WE NEED TO TALK” that left their fans speechless. In it, Austin admitted that he’d had an online affair with a woman and that there might be some very, very, very NSFW videos of him hitting the internet soon.

“It was actually nearly a year ago,” he explained. “Someone reached out to me, sent me some pictures and stuff, a girl, and I, instead of blocking her and moving on, decided to flirt with the idea of responding and basically had an online affair for, like, five months.”

Austin went on to say that he “felt terrible” and that things “just spiraled out of control.”

“I wasn’t even looking for this,” he said. “Something just fell into my lap, no pun intended, and instead of ignoring it, I fell into it.”

All the while, Britt sat beside him looking embarrassed and miserable.

They were initially uploaded to several fake Twitter accounts, including one called @ScumbagaustinN and another called @null_mistress. A gay blogger by the name of Queenofshadenudes also posted them on Tumblr and Snapchat.

Adding another layer of irony to the situation was the fact that, just a few months earlier, right around the time he was cheating on his wife, Austin publicly condemned another Christian family vlogger, Sam Rader, for being exposed in the infamous Ashley Madison hack, telling him to “stop vlogging and focus on your family.” 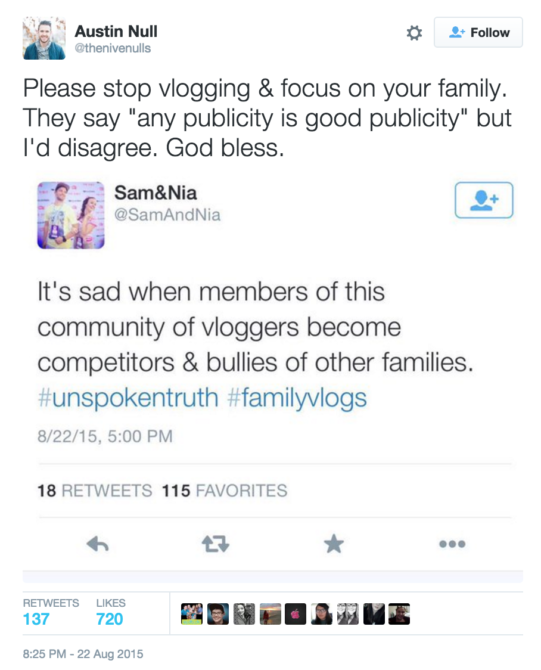 A year and a half after the scandal broke, Austin and Britt announced they were divorcing. She took over their YouTube channel by herself and he disappeared from the spotlight.

Time passed. Then in 2019, he opened up about the scandal to the podcast Who Hurt U in an episode appropriately titled “Once a Cheater, Always A Cheater?”

Austin explained that he was “checked out” of his marriage when the woman, who he later learned had a history of preying on men like himself, first slid into his DMs in 2015.

The two engaged in a brief online affair that mostly consisted of sending x-rated videos to one another before he eventually “felt bad” and ended things. Five months later, the woman leaked the videos, which he said “really f*cked me up.”

“At the time, the context was like, popular Christian family vlogger YouTuber guy cheats on wife, sends nudes, blah, blah, blah,” he said. “The optics were terrible.”

But that’s not even the worst part.

Austin said people sent the videos to his sister and his mom, which is, frankly, horrifying. They also contacted his sponsors, resulting in him losing several business deals, including a TV project he had been working on.

He and Britt tried navigating through everything, but ultimately decided to end things when… he met another woman online and had an affair.

“I knew I should’ve been out of the relationship a long time,” he reflected, “but, like I was saying, in my mind I just was like, ‘I have to make it work. I just have to.’ I literally just felt stuck.”

Well, today Austin lives in Kansas City, Missouri and works for a Los-Angeles based advertising agency focusing on influencer marketing. He seems to have completely dropped the whole online Christian persona. He no longer tells people to repent for their sins and instead dedicates his social posts to things like…

Calling out white people for being dipsh*ts…

Oh my ? I got on Facebook and saw some of my fellow whites in the comments of celebrity Juneteenth posts already turning this into a “we should also thank the soldiers who fought to make this day possible” ??????

Logan Paul walking out to The Greatest Showman soundtrack is definitely the whitest thing I’ve ever seen. And he already reminds me of if white supremacy could sweat ???

Austin has certainly come a long way from his days of vlogging about Jesus and criticizing others publicly for behavior he engages in privately. He seems like a guy who messed up, had a crappy thing happen to him, learned from the experience, and changed for the better.

As for the woman who leaked his x-rated videos, from what we’ve been able to find, she’s never been publicly identified and Austin never pressed any charges, though he did hire a lawyer to get the videos scrubbed from the internet.