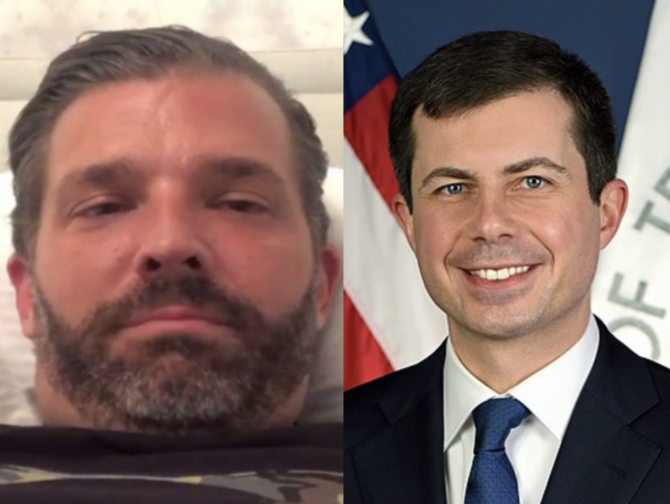 Don Jr. took a break from posting batsh*t crazy videos on Facebook to fly down to Texas to speak at his dad’s rally over the weekend, where he launched a bizarre attack against Secretary of Transportation Pete Buttigieg.

On Saturday, Jr. spoke at his dad’s rally in Conroe, Texas, during which he took a moment to rail against Buttigieg for taking paternity leave after the birth of his twins, Penelope Rose and Joseph August, last year.

“If you’re a male kindergarten teacher and you take paternity leave, I think that’s wonderful I couldn’t care less,” Jr. said. “If you’re the secretary of transportation, you get your ass to work!”

Buttigieg took about four weeks off last August after adopting the twins with his husband.

At the time, he was blasted by “family values” conservatives who felt a dad taking time off to be with his newborns was unacceptable. Fox News’ resident homophobe Tucker Carlson mocked Buttigieg for “trying to figure out how to breastfeed.”

This isn’t the first time Don Jr. has gone after Buttigieg.

During the 2020 Democratic primaries, he was widely ridiculed when he tweeted a statement from Mayor Pete’s campaign website that he clearly hadn’t read, misrepresented what it said entirely, then attacked Buttigieg for not knowing more about major historical events, like “the collapse of the Berlin War”.

I remember when the Berlin War collapsed too. That was just after the Bowling Green Massacre recorded by Frederick Douglass.

Jr. also went after Buttigieg for his stance on HIV transmission laws, accusing him for wanted to make it “legal to knowingly give someone HIV” in 2019.

“THIS IS INSANITY!!! Where does it ever stop with the left and their crazy agenda? In what world is this anything less than sick and deranged?” he tweeted. “Pete Buttigieg thinks it should be legal to knowingly give someone HIV.”

THIS IS INSANITY!!! Where does it ever stop with the left and their crazy agenda? In what world is this anything less than sick and deranged?

Pete Buttigieg thinks it should be legal to knowingly give someone HIV https://t.co/H5N8UHXiQf

Prior to Saturday’s speech in Texas, Don Jr. took his 12-year-old son to a gun factory, where he purchased the child an AR-15 rifle.

Good morning to all the fathers out there who don’t take parenting advice from Donald or Donald Jr.

@DonaldJTrumpJr sobered up for a rally. Then attacked @PeteButtigieg for taking family leave while his kids look like #WW2 refugees. He must not see #trump world crashing around him. https://t.co/lN2GljvyYY pic.twitter.com/JfVAvLpRlm

Look who’s talking about showing up for work LMAO!

Don Jr thanked God because his 12 yr old son was able to construct an AR15.. for himself… in a weapon’s factory in Texas…“thanks God”… unreal.. a 12 yr old owning a weapon.. of war.. or any weapon.. Isn’t this illegal and should be investigated??

It’s easy to go to work when you hate your kids and you just bumped a rail of cocaine.

He would. His addiction seems to have gotten to his brain I guess! Or..he doesn’t give a shit about his own kids…or he just isn’t a sane human being..the drugs got the better of him I guess! He considers fatherhood second to working https://t.co/wn3wq532Kj

Junior needs to quit the drugs and alcohol addiction and take a paternity leave.