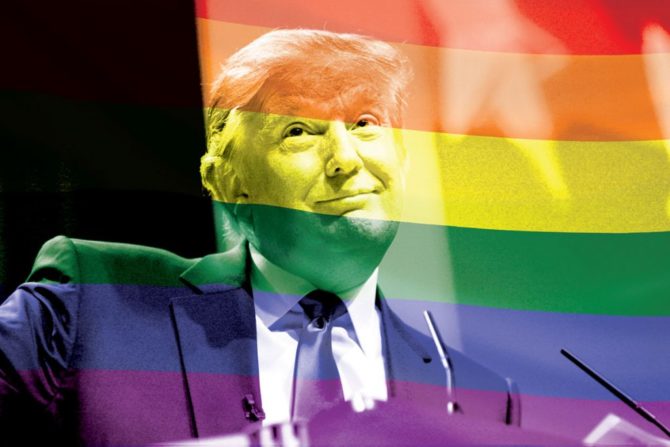 Is the White House intentionally toying with the emotions of LGBTQ Americans by threatening their rights, then walking back those threats, only to threaten them again a day later? Sure seems like it!

On Monday, LGBTQNation was the first to report on rumors that Donald Trump was considering a “religious freedom” executive order that would effectively legalize LGBTQ discrimination nationwide.

After everyone freaked out, Press Secretary Sean Spicer told reporters “we have nothing on that front now.” That was followed up by a White House email to NBC News claiming discrimination gainst LGBTQ people “isn’t the plan at this time.”

And everyone sighed a breath of relief.

Until last night! When The Nation got its hands on what was rumored to be a leaked copy of a “religious freedom” executive order legalizing LGBTQ discrimination nationwide. It was rumored Trump would be signing it on Thursday morning, shortly after the National Prayer Breakfast.

Another frenzy ensued. And then White House spokesperson Sarah Huckabee Sanders told ABC News Wednesday night that Trump wasn’t planning on signing that leaked “religious freedom” executive order. At least, that was the plan for now.

“We do not have plans to sign anything at this time but will let you know when we have any updates,” she said.

Related: White House says anti-LGBTQ executive order ‘not the plan at this time’

Then this morning at the National Prayer Breakfast, Trump said he was committed to fighting for “religious freedom,” telling the audience:

“Freedom of religion is a sacred right, but it is also a right under threat all around us, and the world is under serious, serious threat, in so many different ways. And I’ve never seen it so much and so openly as since I took the position of president. The world is in trouble but we’re gonna straighten it out, okay? That’s what I do, I fix things.”

So we’re back to freaking out again.

Jennifer Pizer of Lambda Legal tells Salon, “We’re now seeing the transition from reality TV to reality. Things that many people dismissed as attention-getting, outrageous comments for purposes of dominating the news cycle have been now turned into policy in a way that many voters were not expecting.”

“Mike Pence and Steve Bannon are driving a considerable amount of the agenda,” she adds, “and that has to be alarming for the LGBT community. An enormous number of people stand to be terribly harmed if this isn’t stopped.”