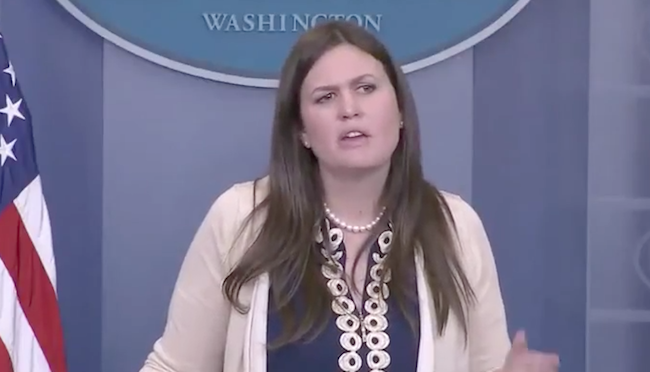 White House spokesperson Sarah Huckabee Sanders admitted Donald Trump is “not sure” of Chechnya’s aim to purge the region of LGBTQ people.

As we’ve reported, at least 100 gay men have been detained, and some have been tortured and even killed.

Huckabee Sanders was asked by The Washington Blade‘s Chris Johnson why Trump hasn’t mentioned the situation in Chechnya, and why there was no mention of the crisis in a statement about Trump’s meeting with Russian foreign minister Sergey Lavrov.

She responded: “I’m sorry, could you speak up a little bit?”

Johnson asks: “Is the reason why it wasn’t included in the readout is because President is not informed about reports of anti-gay violence in Chechnya?”

“Ah–uh, look, I mean a lot of times there are parts of the conversation that aren’t specifically included in a readout,” Huckabee Sanders responded.

“Umm, but, I’m not aware, I have not had that conversation. So I do not know, I was not part of that meeting. So I cannot speak to every detail and I would have to refer you to the readout on the specifics of what I know was discussed.”

Related: Horrifying reports of gay men being rounded up and sent to concentration camps in Chechnya

Asked point-blank if Trump had been briefed on the purge, she answered:

“That is something I would have to get back to you on. I am not one hundred present sure.”

Listen to her response below: