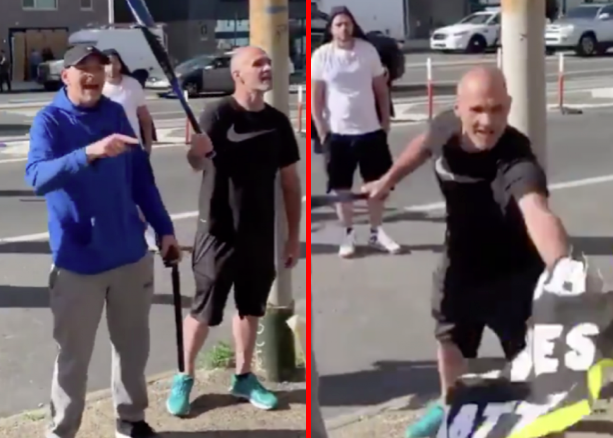 Video of a gang of white supremacists harassing a group of peaceful Black Lives Matter protestors in Philadelphia has gone viral.

The disturbing video, which has been viewed almost 700,000 times since Monday, shows roughly half a dozen angry white men, some of whom are holding baseball bats and billy clubs, approach the protestors.

“Pick one of us to f*ck up and we’ll go around and fight you one on one,” one of the men threatens. “Take that f*cking f*ggot energy and go somewhere else!”

While the man shouts the homophobic slur, another man rips a Black Lives Matter sign from a protestor’s hands, tearing it in half.

Meanwhile in #Philly: my friend shot this video of assholes threatening protestors and "defending the cops" … stay safe bbz. ? pic.twitter.com/u1KEtkPipy

So far, the men in the video have not been identified, but condemnation for them was swift.

Are they testing out their masculinity or something? 🙄

That guy just assaulted someone else and destroyed their property. He should be arrested.

None of these guys have been in a fight since the 3rd grade.

Nazis allowed to roam the streets unfettered but a sitting protest gets gassed, great work America.

Brave white men in a group with weapons talk 💩 to a women with a sign. Lmfao

Just another day in Trump’s America.