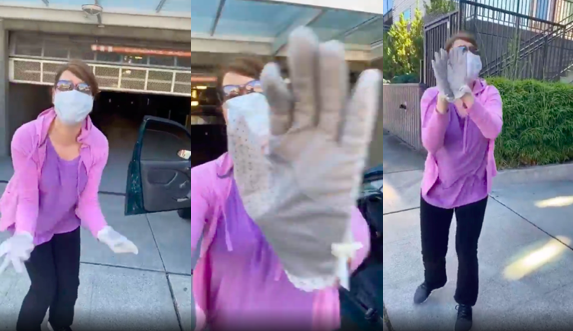 Another day, another white woman harassing a Black man for seemingly no reason. This time is was a Seattle woman who allegedly screamed a racial slur at a Black motorist then chased after him with her car.

According to Karlos Dillard, the unidentified woman cut him off on the road then flipped him the bird and called him the N-word before following him with her car for four blocks. It was only after she saw he was recording that she stopped.

That’s when Dillard turned the tables and started following her.

Footage shows him confronting the woman as she gets out of her car. She immediately charges at Dillard and tries to grab the camera away from him. He tells her not to touch him and she bursts into sobs.

“I have a Black husband!” she shrieks as she cowers in fear then screams that she’s being “attacked,” the not-so-subtle dog whistle for someone, anyone, to call 911.

“You’re attacking me right now!” she screams, then accuses Dillard, who is standing several feet away, of trying to “ruin her life.”

“You’re gonna ruin my life and you don’t even know me!”

When a white bystander tries to intervene, Dillard says, “She can apologize for calling me a n*gger and flipping me off.” To which the woman responds by shrieking even louder.

By this point she’s in absolute hysterics. The bystander orders Dillard, “You need to leave.” And that’s when a witness to the incident can be heard off-camera saying, “She started the whole thing.”

More and more neighbors begin congregating around the inconsolable woman, who continues sobbing uncontrollably. Eventually she manages to compose herself enough to apologize to Dillard. She admits to chasing him with her car and flipping him off, though she does not admit to calling him the slur.

To which Dillard replies, “I’m a Black gay man and I live my life going through this every day. Just spread love and happiness.”

The response, however, has been mixed.

“Why would the guy get out of his car over someone flipping him off?” one person asks. “Oh well, people flip each other off all the time during traffic.”

“Following her home is crazy,” another person wrote. “What if it was reversed? If she followed a Black person home after flipping her off and calling her a name?”

“That’s how my Black bros get killed,” someone else counters. “He did the correct thing. He was protecting himself the right way. The next thing cops kick in his door and shoot him over a rude white woman.”

“If there was no camera he would be in jail or dead,” another person adds.

I’m literally not leaving my house anymore. This Karen cut me off, break checked me and then followed me for 4 blocks. When I started recording her antics she peeled off and tried to get away with her racism. I had time today to let her know that i am not the one. I’m glad SEVERAL white and black people saw her racism and had my back. #karens #seattle #blm #karlosdillard #karensinthewild