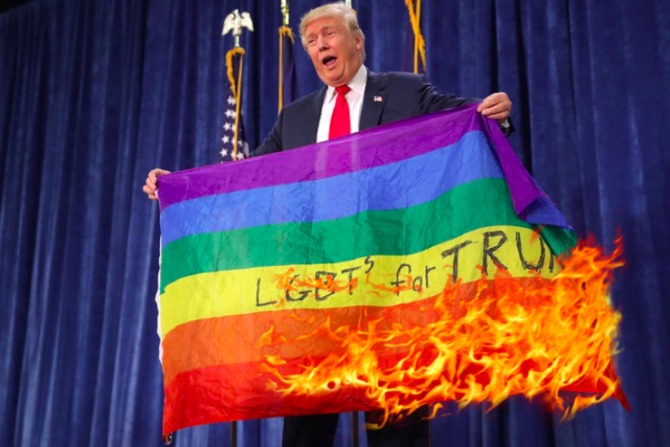 As Donald Trump gears up to be the first U.S. president ever to speak before a hate group when he addresses the Values Voters Summit in Washington, D.C. on Friday, some of his most loyal LGBTQ supporters are beginning to wonder if he really has their back.

During the 2016 presidential campaign, Trump demonstrated his support for the LGBTQ community by waving rainbow flags in front of the TV cameras and saying things like “I will do everything in my power to protect our LGBTQ citizens from the violence and oppression of the hateful, foreign ideology [of Islamist terror]” during the 2016 Republican National Convention.

But now that we’re well into his first year as POTUS, the 14% of LGBTQ who voted for him in hopes that would make good on his promise to be an ally are starting to realize that, maybe, just maybe, that was all a bunch of malarky.

Between the conservative extremists he’s been surrounding himself with in the White House, the hasty transgender ban in the military, and, now, his planned speech before theValues Voters Summit, LGBTQ Trump supporters beginning to see that the guy Gregory T. Angelo, president of the Log Cabin Republicans, once called “the most gay-friendly Republican nominee for president ever”, might not be so gay-friendly after all.

“I definitely have concerns with what is going on at Department of Justice,” Chris Barron, a longtime conservative gay-rights activist, tells the Daily Beast. “[Attorney General Jeff Sessions] has a very different position on LGBT issues than the president does.”

But hope springs eternal. Kind of. Barron says, despite his concerns, he still supports Trump.

He adds that technically it’s Sessions’ job to “carry forward the president’s agenda and not push his own,” however, he adds, “I’m certainly concerned he is [pushing his own].”

Related: Donald Trump books the most antigay of antigay clergy for his doomsday inauguration

I never thought that Donald Trump was an anti-gay homophobe. I certainly didn’t think that when I met him back in 2011. But we’ve all learned a lot about who he really is since then. With his political pandering and posturing to endear himself to the intolerant wing of the GOP over the last few years, it doesn’t surprise me that this administration will go down as the most anti-LGBT in history.

Richard Socarides, who served as White House special assistant and senior adviser under President Clinton, says he doesn’t think things are going to get any better either.

“As the Russia investigation heats up and as his failures at basic governing pile up, I think gays will more and more become scapegoats. It’s a pretty old, standard playbook for political bullies,” he says.

“Anyone who thought Trump would go easy on the gays was clearly wrong. The question now is not whether he will set us back, but how far.”

Related: Even Trump Supporters Should Be Able To Follow This Flow Chart Of Donald’s Stance On “The Gays”