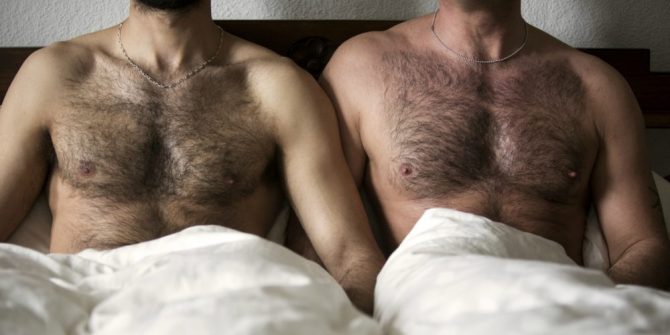 The woman and her husband, both in their 30s, have been together for about six years and married for two. Last year, they met up with her husband’s childhood friend and his fiancée for drinks.

At some point during the evening, the topic of sex came up. The woman says she was shocked to learn that her husband and his buddy used to jerk off together when they were younger.

Related: Why straight guys are seeking groups where they cuddle other men

“It turns out they masturbated together as teenagers, which included ‘giving each other a hand’,” she writes. “I was taken aback by this, but they all seemed to think it was hilarious, and my husband was embarrassed, so I shrugged it off. Teenagers do things. We didn’t talk about it again.”

Cut to one year later.

The woman was at out with the fiancée for her bachelorette party when someone cracked a joke about the guys getting “too friendly” with the strippers.

“The fiancée said they were more likely to get too friendly with each other,” the woman writes. “She then started telling the group that she knew my husband, her fiancée, and at least one other guy from their friend group masturbated together into college and their 20s.”

According to the woman, the fiancée went on to say she suspected the guys still did it from time to time but “she doesn’t care because it’s ‘just jerking off.'”

“I’m now kind of paranoid about this!” the woman writes. “I did some Googling that suggested this is a fetish for some guys who are with women. Um, is it?”

She wonders: “Is there a way I can bring this up with my husband without accusing him of cheating? If he’s hiding a major part of his sexuality, I kind of worry about what else he could be hiding.”

“There are guys out there who mostly have sex with women but enjoy the male bonding that comes with sitting around and busting some nuts with other men,” he writes. “As you may have noticed, spending time with naked men is fun.”

Or course, if she has a problem with this, she should definitely speak up, Juzwiak says.

“If you’re in a monogamous arrangement, it’s perfectly reasonable to expect your husband to keep his hands on his own controller and not be playing another guy’s joystick,” he says. “Request more detail and clarity. He might be embarrassed, but he owes you the full story.”

“For maximum extraction potential, work from love and compassion, not shame.”

What do you think this woman should do? Share your thoughts in the comments below.