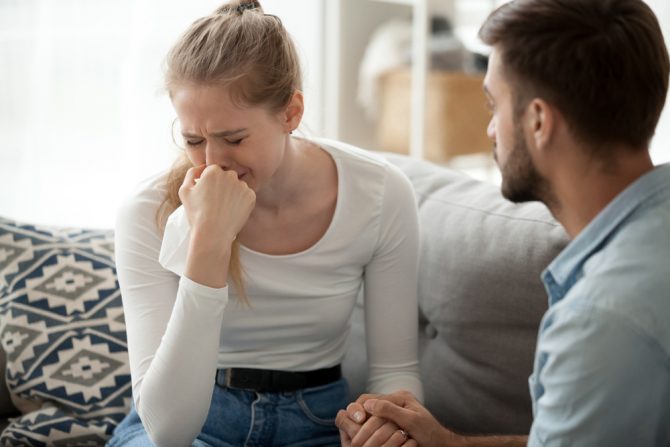 Janine Cole thought her life was perfect. She was happily married for over 20 years to her husband, Mike, with whom she had three beautiful children. Then three years ago, it all came crashing down.

One morning at the breakfast table, Mike looked up at her and said: “I’m gay.”

“I’d feared this day would come and some part of me knew it would, as we had spent the past two years on an emotional roller coaster incorporating his emerging attraction to men into our marriage,” she writes in a powerful and heartbreaking new essay published by Metro.

Janine explains that two years earlier, Mike had confessed to her that he was attracted to men.

“He was adamant that he didn’t want to lose me—he loved me and wanted to make our marriage work,” she recalls. “With three kids, a full time job and helping my husband figure out his sexuality, I was completely underwater. We decided it would be easier to keep this to ourselves.”

After seeing a string of therapists, Mike determined that he needed to explore his sexuality in a deeper, more meaningful way. It took Janine a while to get on board with the idea. And even when she did, she was never fully on board.

“Intellectually, I had wrapped my head around it, but my heart was far behind. Those first few times he met his friend – another man who was also married – I had what I can only describe as out-of-body experiences.”

On the days they would meet up, it was painful watching him get ready and putting more effort in than he normally would. Then later, relief when I’d receive his text saying ‘I’m on my way home’. Those words were the reason I was able to do this for him – it meant he was coming home and I had made it through.

A few months later Mike’s friend came to realize that he was gay, not bisexual and he and his wife decided to end their marriage. I held my breath as this had been my fear from the beginning but Mike said it didn’t change anything – he was confident in his bisexuality.

As time wore on, however, Mike grew more distant and Janine grew more concerned her marriage was crumbling. Then came that fateful breakfast when Mike told her he wasn’t bisexual, he was gay. Shortly after that, he told her he wanted to pursue a relationship with his “friend.”

“I grieved hard for the end of our marriage. Knowing that my pain wasn’t our pain anymore; it was all mine. I know Mike struggled too, but he had someone waiting for him and it was hard to watch him start his new life while I felt left in the rubble of mine.”

Eventually, they were able to work through the chaos. Today, Janine says she and Mike are on good terms, despite their difficult and traumatic past.

“Mike’s discovery freed us,” she writes. “Neither one of us could have continued on the path we were on for much longer, no matter how much love there was between us.”

“I saw him struggle to accept himself and when it was time, I did the hardest thing I’ve ever had to do,” she continues. “I let him go.”

She says she’s grateful for the 21 years they had together, “especially those last two years.”

“As challenging as that time was, we grew as individuals and as a family,” she writes. “We demonstrated that love sometimes means letting go when it’s the right thing to do, that being who you are is always best, and that family doesn’t fit one mould.”

“We showed that separating doesn’t mean less love or more anger; it means different love and new ideas about what a family can be.”