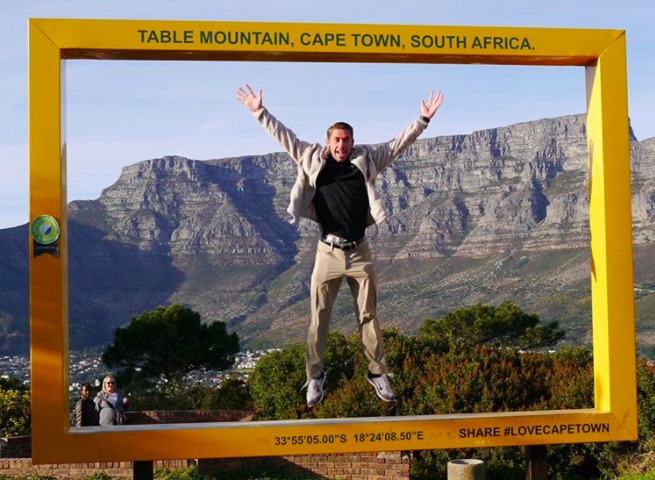 “Deep down I knew I was gay,” 23-year-old Steven Stumph writes in a moving new essay published by Outsports, “but I held it as my biggest secret, even afraid to let myself know.”

Steven graduated from the University of Southern California last June. While he was there, he was team captain of the Trojans swim team, where he competed from 2014-17. Throughout high school and during his first two years at USC, however, he kept his sexuality a closely-guarded secret.

The summer after his sophomore year, Steven got the opportunity to travel to Africa. He went to Lusaka, Zambia, then to Livingston, Zimbabwe, and eventually to South Africa, where he went on a safari.

During our visit, we had a male safari guide. One night I was star gazing, admiring how I could see all the constellations in the amazingly crystal-clear sky. The safari guide came up to me, took my hand, came real close and pointed out all the Southern Hemisphere constellations.

He proceeded to say, “I totally understand if you don’t want to answer, if you give me no tip, and report me to my boss, but I want to ask you something. By any chance are you gay?” In this moment, all I wanted to do was say yes. I was in the middle of nowhere, literally. I could tell him I was gay, and no one else would have to know. I could finally let out my secret.

I was not ready to tell him, let alone in the middle of nowhere halfway across the globe. I told the safari guide no. He responded, “aw, all right man. My mate thought you were cute.” He motioned for his buddy to come around the corner and out walks this extremely handsome man. I told myself, that’s it, never again am I going to lie about being gay.

When he returned home, Steven decided to come out to his friends and family. He told his best friend first, who responded by saying, “It’s about time!” Then he told his parents, who were also immediately accepting. Finally, he told his teammates at USC. The response was overwhelmingly positive.

Today, Steven credits his safari guide for giving him the courage to live his truth.

“The reason I waited to come out was because I was afraid of what other people thought of me. I was sacred their perception of me would supersede the person I wanted them to see,” he writes. “But all this time I was hiding the real me and living a fake life for other people.”

Go check out my coming out story on outsports.com! (Link in bio) I’m lucky enough to have an ideal coming out story and wanted to share my experience with others. I’m incredibly thankful for my family and friends who support and love me no matter what! This past year has been filled with some very interesting stories, to say the least, and I wouldn’t be where I am today without them!

O D'd on too much fun this weekend

Soaking up the last rays of LA

To live will be an awfully big adventure – #PeterPan

Stand up for who you are and what you believe in. Thanks for instilling me with these values Bay Area, time to continue the adventure in LA!

Thanks @jenquillin for an incredible weekend!