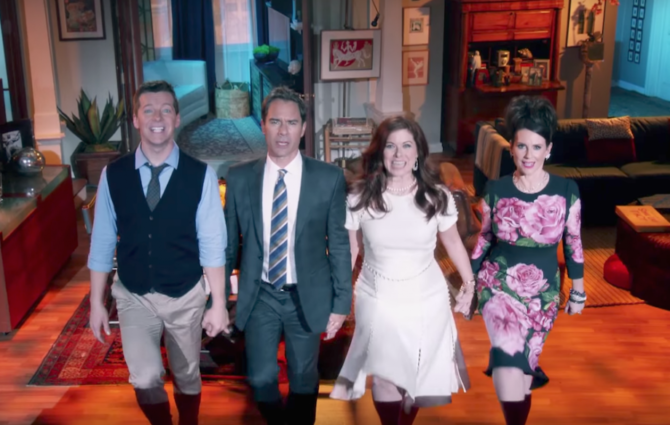 Nostalgia is a pretty effective marketing tool, so you can bet your bottom’s dollar (just be sure to share the winnings with him) that between now and this fall, we’re going to be seeing a whole lot of teasers, trailers and tid-bits about Will & Grace

And frankly, we say bring ’em on.

11 years and a few ?? later, they're back! #WillAndGrace, Thursdays this Fall on @NBC. pic.twitter.com/lcQvNeAscv

In the latest wink at audiences, Will, Grace, Karen and Jack dramatically enter the frame before packing their keisters on directors’ chairs and posing for a pic. It’s… not a lot.

“They’re back,” reads the screen at the end of the promo.

Last month, the show’s creators, Max Mutchnick and David Kohan, divulged that the upcoming revival will pick up where the plot left off in the series finale.

In the finale, the main characters all stop speaking to each other for twenty years following a major fallout. The revival picks up in present day during their feud.

Max continued: “We’ve just come out of a story camp that lasted about three months. That’s where we break and write all of the episodes that we will be filming in August or whenever we start. I will tell you that almost more than anything, more time went into figuring out how are we going to reintroduce the show and what were the rules going to be and how were we going to address that finale.”