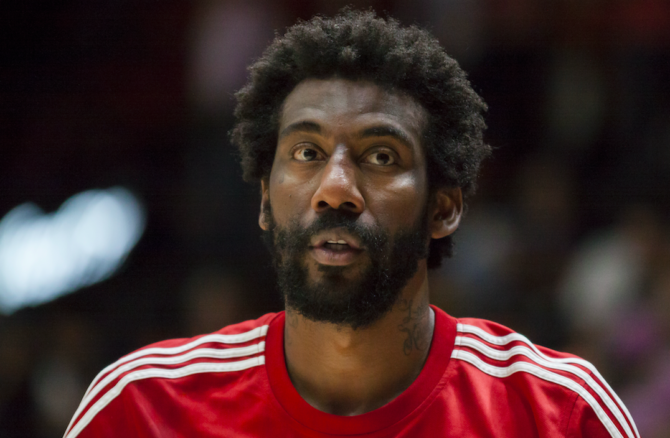 On Sunday, former NBA star Amar’e Stoudemire was honored with the prestigious MLK Jr. Award for tolerance in Jerusalem. Two days later, he told a reporter he wouldn’t be comfortable with a gay teammate. Not just that, but he would avoid the person altogether.

“I’m going to shower across the street,” Stoudemire said. “Make sure my change of clothes are around the corner. And I’m going to drive–take a different route to the gym!”

When asked if he was joking, Stoudemire replied, “I mean, there’s always a truth within a joke.”

Stoudemire, who used to play for the Phoenix Suns and the New York Knicks, currently plays for Hapoel Jerusalem in the Israeli Premier League.

Yesterday, Jason Collins responded to his comments by calling them “sad” and “troubling”:

Very sad & troubling to think that @Amareisreal was just given this award. His homophobic comments have no place in sport or in our society. https://t.co/A81sTzItOi

John Amaechi also tweeted a rebuke of Stoudemire’s remarks, calling him a “man-child” who spews prejudice:

This isn’t the first time Stoudemire has made homophobic remarks in public either. In 2012, he was fined $50,000 for firing off a gay slur at a fan on Twitter. At the time, Stoudemire issued an apology saying he was a “huge supporter of civil rights for all people.”

UPDATE: In a statement to TMZ Sports, Stoudemire said his remarks were meant to be jokes and said he is sorry if he offended anyone:

I want to apologize for my offensive comments against the LGBT community. These remarks were taken from a larger interview where a reporter was asking me hypothetical questions, and all my answers had a comedic undertone. The answers I gave were meant to be taken as jokes & I am deeply sorry for offending anyone. I am open to creating a dialogue to assist the fight the LGBT community encounters daily and will continue to focus on playing basketball.