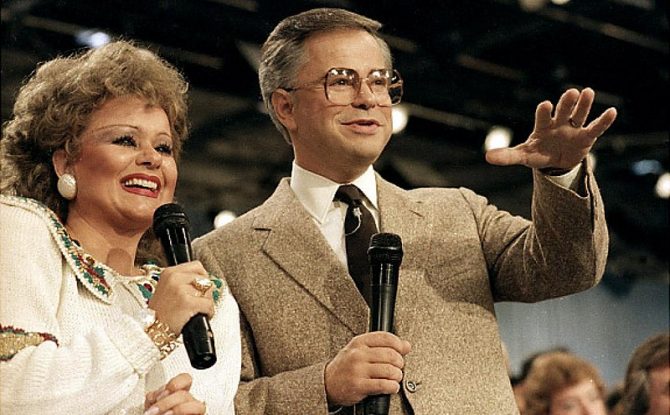 The Precursor: The Eyes of Tammy Faye

With the new Tammy Faye Bakker biopic The Eyes of Tammy Faye about to debut this weekend at the Toronto Film Festival, what better time to revisit the original documentary that inspired the film, and the real-life rise and fall of the titular gay icon?

The Eyes of Tammy Faye, directed by queer cinematic maestros Randy Barbato and Fenton Bailey, recounts the tumultuous career of televangelist Tammy Faye Bakker. Tammy Faye, along with then-husband Jim Bakker, rocketed to national stardom with their series of Christian-themed programming in the 1970s and 80s, starting with a low-rent puppet show for the kiddies. The regional broadcast proved so popular that the Bakkers managed to parlay it into a full-scale network, which saw Tammy Faye hosting several programs per day and Jim running constant fundraising efforts to keep the network–and later, the Bible-themed amusement park Heritage USA–afloat. The Bakker’s lavish lifestyle started to raise eyebrows among the press, just before a sex scandal involving Jim Bakker and several associates brought the whole enterprise crashing down.

Tammy Faye, however, managed to endure. The Eyes of Tammy Faye argues that while Tammy Faye Bakker had a front-row seat to scandal, she didn’t actually know what was going on. With Tammy Faye, the movie suggests, what you saw was what you got–an endlessly faithful, optimistic, tender woman, decked out in more makeup than an elephant in drag. Moreover, Tammy Faye proved a steadfast ally and advocate for the queer community, in particular at a time when the AIDS crisis had fueled homophobia to new levels. Tammy Faye argued to her followers that Christians should not chastise or vilify LGBTQ people, especially those dying of AIDS. In her view, Christianity should welcome and support the queer community without judgment.

The Eyes of Tammy Faye first announced Fenton Bailey and Randy Barbato as two important queer artists on the rise back in 2000. The pair since went on to direct and produce several excellent films exploring the intersection of sex, personality and the media, including Monica In Black and White (a filmed Q&A with Monica Lewinsky), Party Monster (a doc on Michael Alig, James St. James and the New York club kids) and the quintessential Inside Deep Throat (an exploration of the cultural effect of the adult film Deep Throat). Oh, and the pair went on to produce a little show called RuPaul’s Drag Race, which helped them launch a network of their own, World of Wonder Presents Plus. Not too shabby for a pair that started as no-budget documentarians.

Of course, it helped that the two selected a terrific subject. Following The Eyes of Tammy Faye, Jim Bakker reemerged from prison as an apocalyptic televangelist selling supplies for the Rapture and denying the existence of COVID-19. Tammy Faye continued to tour, write and preach her gospel of love and acceptance, right up until her untimely death in 2007 at age 65. Tammy Faye kept her message going right up until the end, taping her final TV appearance just two days before her death from cancer. At the time, she weighed just 65 pounds.

To understand the brilliance of Jessica Chastain’s performance in the new film The Eyes of Tammy Faye (and yes, we’ve seen it), viewers should take a trip back to the documentary that started it all. For that matter, to understand how Tammy Faye earned her status as a queer icon, the documentary also works as a perfect primer. Have a look and fall in love with a human work of art.

Streams on World of Wonder Presents Plus, Tubi, Amazon, YouTube and VUDU.