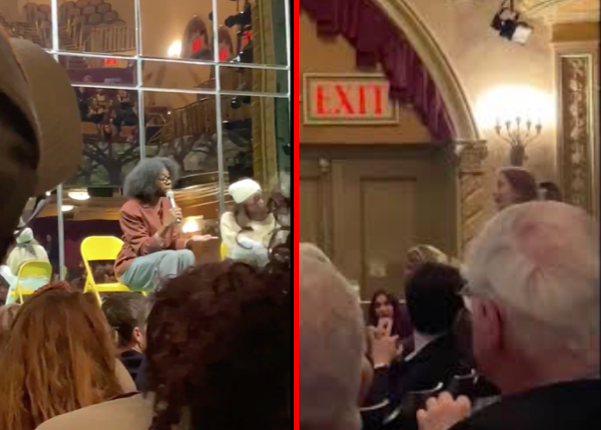 Jeremy O. Harris is definitely having a moment. The 30-year-old gay, Black playwright’s Slave Play is one of the hottest shows on Broadway. It’s also one of the most controversial.

The play follows three interracial couples as they navigate their sex lives and participate in an Antebellum master-slave role-playing therapy workshop in an effort to fix their issues.

Last week, Harris was participating in a Q&A following performance of Slave Play when a woman in the crowd stood up without being called upon and accused him of being “racist against white people.”

The outburst was caught on tape and quickly shared on social media.

Just saw the amazing @SlavePlayBway by @jeremyoharris after which a white audience member jumped up and accused him of being “racist against white people.” The confrontation proceeded from there. Clips in this thread. #slaveplay pic.twitter.com/KiXbo0rdcC

In several videos, the woman is seen pointing her finger in Harris’ direction while shouting about how she “doesn’t want to hear that white people are the f*cking plague all the time.”

Which begs the question: Why the hell did she buy tickets to see Slave Play?

She then goes on to say she has been the victim of rape, false arrests, having her children taken away, and “being told as a single woman I’m not good enough to f*cking raise them.”

“How the f*ck am I not a f*cking marginalized member of this goddamn society?” she hollered.

When she was finished, Harris calmly replied, “I never said you aren’t. I never once said that you as a white woman were not a marginalized person. But if you heard that in my play, I don’t know what to tell you. Perhaps read it or see it again.”

Evidently, this didn’t satisfy the woman, because she just kept on shouting about how she was sick and tired of hearing a “whole bunch of stuff about how white people don’t get how racist they are,” and about a time “300 years ago.”

Which once again begs the question: Why the hell did she buy tickets to see Slave Play?

Imma tell my kids this was The Blind Side pic.twitter.com/lAbc9D8KuP

“She just freaked out,” a witness tells Buzzfeed. “The videos don’t do it justice. She went off on him…she was screaming at the top of her lungs. She could not handle her own guilt or responsibility in her own feelings and she demanded that Jeremy help explain and handle her feelings.”

Speaking to the Washington Post, Harris says he allowed the woman to scream out her frustrations at him because, “It would have been hypocritical of me as someone who said from the beginning, I wanted this to be a play that sparked conversations.”

“Rage is a necessarily lubricant to discourse,” he said.

Subscribe to Queerty for a daily dose of #life #jeremyo.harris #racism stories and more