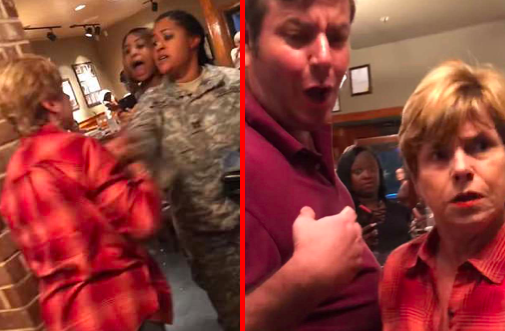 A Georgia woman was taken away in handcuffs after assaulting two female soldiers, including a pregnant one, who she says “got in her way” in the parking lot of a chain restaurant.

The attack happened on Saturday night at a Cheddars in Macon, Georgia. It all started when 72-year-old Judy Tucker and her homophobic son tried pulling into a handicapped spot in the parking lot, but soldiers Treasure Sharpe and Stephanie Mitchell got in their way.

Tucker (who, for the record, is not handicapped) parked elsewhere then went into the restaurant, where she became enraged with the two soldiers.

LaKeycia Ward caught the whole thing on camera and shared the video on social media, where it quickly went viral.

In the video, Tucker can be seen screaming at Sharpe. When Mitchell tries standing in front of her friend to protect her, Tucker gets even angrier and hits Sharpe in the face.

To which Tucker’s son responds, “Oh really? By her?”

Police were called and Tucker, sobbing, was arrested. She was charged with simple battery and booked into Bibb County Jail where she was later released on bond.

Georgia law dictates that assaulting a pregnant woman is a misdemeanor of a “high and aggravated nature.” Tucker could face up to a year in prison, and/or a fine of up to $5,000 for the attack.

Related: The most ridiculous, most insane, most unhinged video meltdowns of 2017