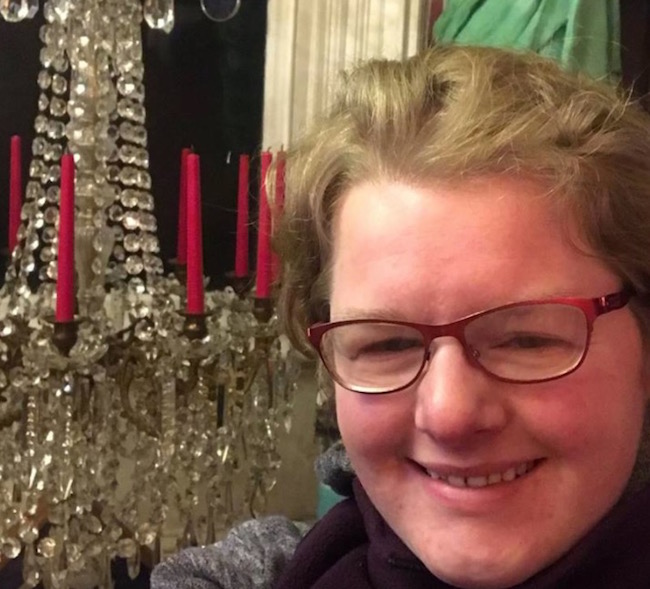 Objectophilia is a term that describes the sexual attraction to objects — an old shoe, a Ball Mason jar; you name it.

Well, one woman — a self-described “objectum-sexual — has just announced that she’s engaged to a chandelier.

33-year-old Amanda Liberty claims she fell head over heels in love with the chandelier after seeing it listed on eBay last year. She subsequently purchased it for  £400 ($540).

She calls the chandelier Lumiere and claims it’s a female who is often privy to her cuddles and kisses.

She proposed to the lighting fixture on Valentine’s Day, even giving Lumiere an engagement ring.

Liberty has had several lesbian relationships over the years. During a trip to America, she fell in love with the Statue of Liberty, who she calls Libby. That’s why she changed her name to Liberty via deed poll in 2010.

But the long-distance relationship eventually wore down their bond, and so now Liberty is a sprawling open relationship with all 25 of her chandeliers; not just Lumiere.

Though engaged to Lumiere, she often sleeps with a smaller and thinner chandelier called Jewel.

“None of my chandeliers are jealous of each other,” she says.

“They understand that I love them all for their different personalities.

For example, I love kissing and cuddling Lumiere, but I sleep with Jewel every night as she is portable and very nice to cuddle.”

Liberty discovered her sexual attraction to objects at 14, after she fell in love with a drum kit. (Her rebellious phase?)

“I’ve always loved the look of chandeliers and when I saw my first chandelier, Luna, it was love at first sight,” she says.

“You can’t control who you fall in love with and things just went from there.”

She thinks she can “sense the energy” that emanates from chandeliers, all of whom she considers female.

She thinks her feelings are completely natural and comparable to homosexuality:

“I want others to see how happy the chandeliers make me, and how much they’ve enriched my life.

I’m not hurting anyone by entering into a relationship with them. I am simply just following my heart.”