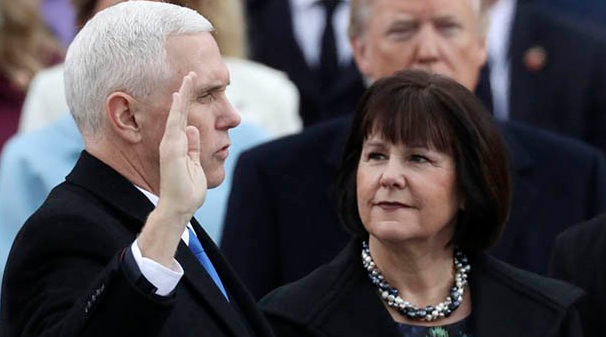 If you thought Donald and Melania had a twisted relationship, just wait until you hear about Mike and Karen Pence.

A new exposé published by the Washington Post on the Vice President and his wife paints a chilling portrait of an unusually close relationship between a husband and wife.

“They are in a strong, supportive marriage bound by common faith,” Peter Rusthoven, who has known the Pences for more than 25 years, says. “I don’t think they make decisions separately.”

But is it really “strong” and “supportive,” or is it more creepy, co-dependent, and controlling? You decide…

According to the article, Mrs. Pence, who Mr. Pence refers to as “mother,” doesn’t permit her husband to attend any events where alcohol is served unless she is with him. She also forbids him from spending any time alone with any women other than herself. Ever. That means no one-on-one meetings. No work lunches. No coffee runs. Nothing.

As Indiana’s first lady, Karen did something no other first lady had ever done before when she demanded an office on the second floor of the statehouse, just steps away from her husband’s. And when he was serving as a House member in Washington, she had a private phone line installed in his D.C. office that only she had the number to.

In addition to all that, the Washington Post reports that Mrs. Pence insists on traveling with Mike almost everywhere he goes. When he was Governor of Indiana, for instance, she tagged along on several trips abroad, including to far-off places like Germany and Japan. She also joined him on his first official trip overseas as Vice President to the Munich Security Conference in February. Insiders say this will likely be routine for all future foreign travel.

Not only that, but Mrs. Pence is also rumored to be very heavily involved in her husband’s policy making. Or at least in pressuring him to make good, Christian decisions.

Supporters and critics alike cite her as a force behind her husband’s socially conservative stances, including his opposition to gay marriage and the religious freedom law he signed as governor of Indiana, which opponents worried would allow business owners to discriminate against gays and lesbians by citing religious concerns.

Apparently Karen’s opposition to all things LGBTQ goes back decades.

In 1991, she wrote a letter to the editor complaining about an article the paper had published an article that “encourages children to think they’re gay or lesbian if they have a close relationship with a child of the same sex.”

“I only pray that most parents were able to intercept your article before their children were encouraged to call the Gay/Lesbian Youth Hotline, which encourages them to ‘accept their homosexuality’ instead of reassuring them that they are not,” she wrote.

Other revelations made by the article: