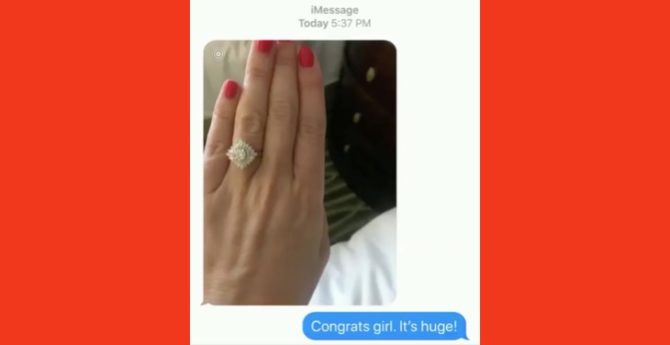 It’s the dream of countless gay men and straight women alike to get one this big — and hey — that’s a nice ring, too!

“Live Photo” is an iPhone camera setting that takes a short video/audio clip instead of a still photo.

Honestly, we don’t know what it’s supposed to be for other than stealthily filling up people’s phone memory quicker so they think they need a new phone sooner.

Many people have the setting on without knowing it, so every time they send a photo to family or friends, they’re unintentionally sending a video.

It’s usually pretty funny, though the joke is typically limited to watching people awkwardly get into their pose.

Twitter user Nick Walsh uploaded a Live Photo he received from his recently-engaged friend showing off her ring.

She inadvertently showed off much, much more.

“Waiting for my friend to realize she sent us all a Live Photo…” he wrote.

Since posting it, the clip has received nearly 300K likes and over 100K retweets.

Take a look at the work-un-friendly post, and it’ll be easy to see why she said ‘yes.’