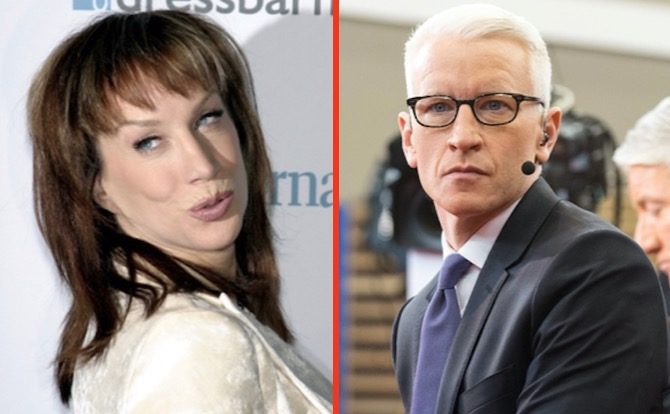 Kathy Griffin’s comedic career hit an unexpected bump in the road after she posed with a doll head gussied up to look like a decapitated Donald Trump.

Then followed the slightly hysterical apology and over-the-top press conference. She lost gigs, cash, fans, and friends — including Anderson Cooper, with whom she’d been close with for 17 years, regularly co-hosting CNN‘s New Year’s Eve broadcast alongside him.

And given Griffin’s comments this week in a sit-down with The Daily Beast, that friendship (not to mention any remote chance of working together again) seems to be lost forever.

While much of the piece focuses on the comedian’s feud with “fame whore” lawyer Lisa Bloom (her words), Griffin does manage to work in a searing burn at Cooper, referring to him as “The Spineless Heiress.” She attributed the insult to “her gays.”

“For the record, I am appalled by the photo shoot Kathy Griffin took part in. It is clearly disgusting and completely inappropriate,” Cooper tweeted shortly after the photograph went viral in May.

Speaking to The Cut, Griffin said she knows Cooper was in a difficult position, but felt she at least deserved a text or phone call from him before he decided to tweet about it.

She claims he added insult to injury by telling Andy Cohen on “Watch What Happens Live” that he and Griffin were still tight — despite the fact that he hadn’t reached out to her since the photo was released.

Griffin ended the friendship after Cooper finally tried contacting her via text, several months after the incident.

Then to add more insult to injury, Cooper replaced her as his NYE cohost with Andy Cohen.

Griffin’s “spineless heiress” insult is assumed to be directed at Cooper’s handling of the Trump photo scandal, as well as his pedigree. His mother is clothing designer Gloria Vanderbilt, the great-great-great granddaughter of business magnate Cornelius Vanderbilt.

In 2016, Cooper told People that he stands to inherit none of the family fortune, though he hardly needs it at this point.