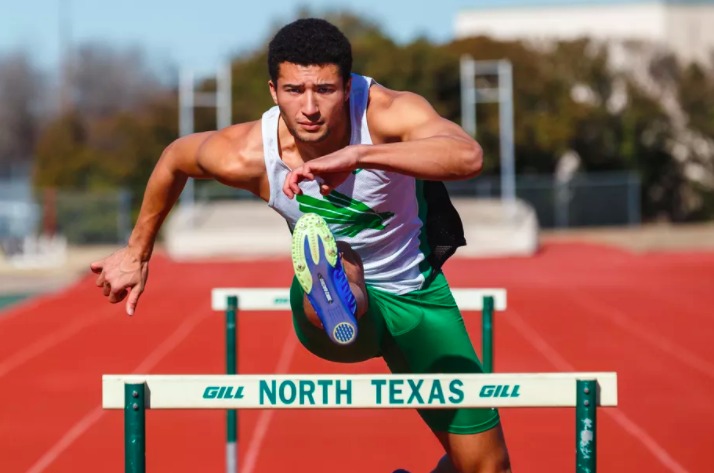 “I love UNT,” he tells Outsports in a new interview, “but Colorado is my home for college track and field. It’s always going to feel like that to me, I think. UNT is just great athletically, and it’s going to be a second home for sure.”

Related: This college track & field star thanks a $700 vacuum cleaner for helping him to come out

He continues, “I would like to win Conference USA in the 60 hurdles, get some points for my team, and help out on the relay.”

So what’s the secret to his success? (Aside from lots of hard work and dedication, that is.)

No, seriously. It’s nail polish. Thomas wears it any time he competes. He says he runs his best times when wearing it.

“I like to paint my nails in my own free time,” he says. “Now, it’s a thing that I do when I’m feeling good about races.”

Living 1000 miles from the man you love is hard, but he makes it a lot easier! & my future with this guy looks as bright as our swimsuits! #gayboys #lovehim #beachbod #miami #southbeach #fl?r?da #tb #tan #babes #bae #mcm #happy #takeusback #ocean #waves #thanksgiving2016

All that the light touches huh?

Just waiting for shots to be fired… #pac12 #colorado #buffs

Pride was perfect, but not as perfect as this dude! #pride2017 #denverpride #aussiebum #fun #bf #bae #boyfriend #gayboys #sko #poolparty