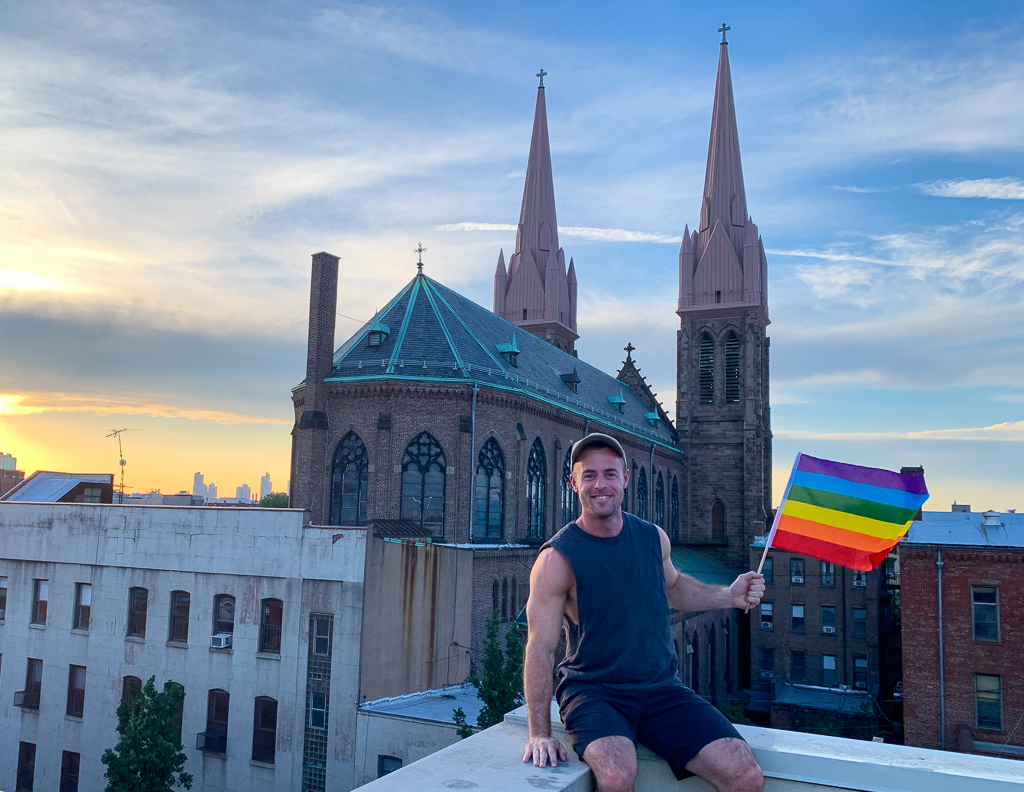 WorldPride hits New York this weekend, and I’ve dreaded it for months.

The dread began this year when I got a Scruff message from a man in Spain. “Visiting New York in June,” he wrote to me—in January. The men coming to town were anxious to nail down plans, to go to the best events, to have the wildest time. The pressure of pride is already intense; WorldPride would be worse.

Pride isn’t just a celebration of identity and a shared journey, though that’s the best part. It’s also a mess of social events and, at parties and on dating and hook-up apps, an intense sexual competition. I get queasy when I think about that concentrated mass of gay men, their eyes appraising my worth versus the worth of the guy next to me.

That’s part of every pride of course, but this year’s branded mega-event will bring more travelers than ever—to say nothing of the hot, rich, famous travelers. Social media superstars will arrive in force to cap off weeks of city-hopping between celebrations, a glamorous late June mini-circuit where they chase an endless pride. I know Instagram isn’t real life, but those people still provide ego foils for me. I’ve felt intense pain over the thought that I wouldn’t do as much, have as much fun, be as attractive, as successful, as wanted.

Each year in the months leading up to pride, I become driven—desperate, really—to improve how I look. I work out and miss workouts, diet and break diets. And until pride hits, I feel steady anger at myself that I only release in a final admission of defeat: “Time’s up! No getting better now.”

At some point when I was younger, I internalized the idea that gay men desired and rewarded only two things: wealth and looks. But I wasn’t from money or heading toward it, and the genetic lottery didn’t spit me out with the code for effortless beauty. The way to feel valued, I believed, would be to work to get a body men would desire.

Objectively—say, if I saw a ten-year before-and-after comparison—I’d have to admit I’ve had success in changing my body. It took thousands of hours of working out and dieting (and chicken and broccoli, though I’ve mostly replaced that with Filipino chicken adobo and . . . asparagus). Many gay men put enough time into this that, especially in the pre-summer months, it becomes practically a second career. 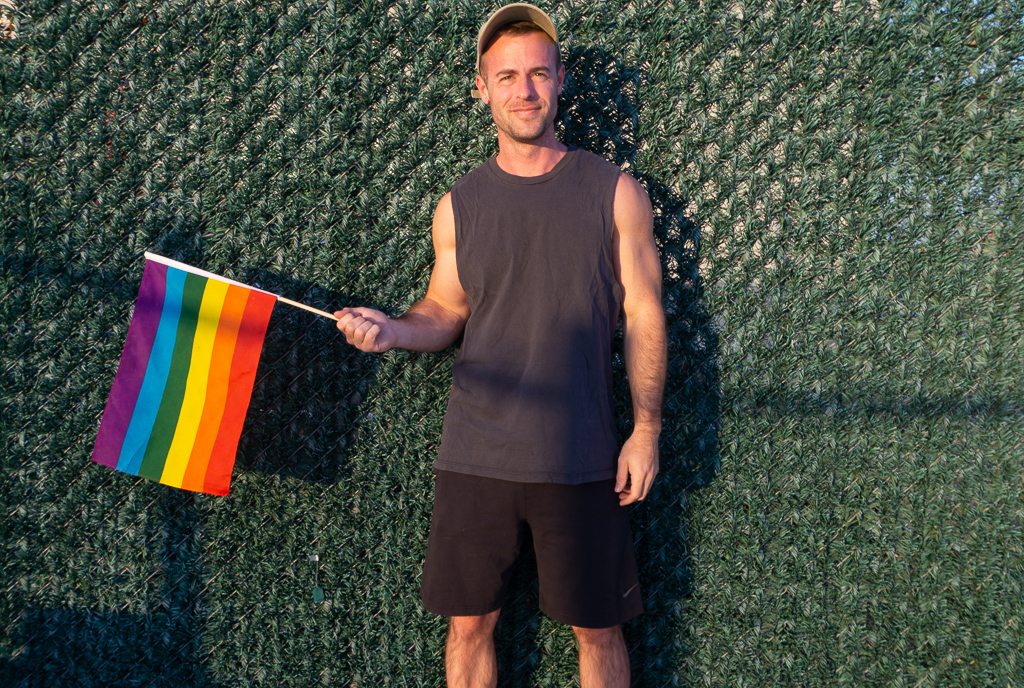 But when I see pictures of myself, I don’t feel pride. I feel shame, anger, and self-hate. I see nothing but flaws. I see myself as small, never lean enough, weirdly proportioned, narrow-shouldered, and backsliding from my “best” shape instead of making constant progress.

When someone compliments an Instagram thirst trap, I chalk it up to the power of angles and lighting or even dissociate from it entirely. My brain only sees the not-good-enough, and because of that, can only imagine rejection.

It affects my daily life and my relationship. Recently, my partner decided to take weekly progress pictures for his own fitness journey. (We reinforce each other, I’ll admit, in both good and bad ways.) I decided I’d join in, but after he snapped a few pics of me in undies and neutral lighting, he awkwardly avoided showing me.

“No, you look great,” he said. “But sometimes you see a picture of yourself and no matter what you look like, it ruins your day.”

He was right: Seeing a photo of myself has sent me into a depressed spiral too many times. To be fully honest, seeing pictures of myself has made me want to die.

This topic is unsexy, to be sure. And because of my relative privilege—I’m cis and white—it might earn eye-rolls from people who view it as whining. I suspect that many guys believe, as I did, that at a certain level of sanctioned, masculine attractiveness you magically must become a chill jock, confident and happy enough to show up to pride and own any party you go to. The self-hating part of me believes that’s true and that I just have to keep working to reach it, or that maybe I can’t because of insurmountable physical defects. Thankfully, there’s another part.

Not everyone struggles with this the same way. Last year, at a big pride party for the first time, my boyfriend had an epiphany seeing all the beautiful influencers in real life. His epiphany: They weren’t that beautiful. They weren’t that ripped. Not the unreachable, brain-wrecking way they appear online. They were people, not gods. And not only that: they were just as scared as he was, looking around nervously, hungry for validation.

It became suddenly obvious that they, too, had hoped their worked-out bodies would shield against the pain of judgment and rejection.

Perhaps more to the point, these were media- and Instagram-enforced standards of beauty. They influence who we find beautiful, but don’t determine it.

When he realized that, my boyfriend feel a lot better. But I spent the same pride party extremely anxious, drinking to try to get past it. I left feeling despondent, convinced that everyone there had seen through and rejected me, decided I wasn’t good enough.

Now, I’m not a mental health professional, and I don’t have a tidy lesson or positivity-bot takeaway. I only just started seeing a therapist who pushes me to think and talk more—trigger warning: cornball language—about validation, self-talk, and authenticity. I’m acknowledging for the first time that I don’t have to be stuck in this cycle, that it’s not gay destiny. But my small epiphanies don’t always stick. I have to re-absorb over and over. I backslide, even if I also make progress.

Related: Casey Spooner is over the commercialization of pride

Here’s one lesson I struggle to re-absorb: I didn’t invent my self-hate spontaneously as a reaction to other queer people or to pride. I was taught to self-hate when I was young. A conservative Christian upbringing, it turns out, can be a brutally effective teacher of gay boys. Even if you weren’t raised that way, the larger culture still works to grind LGBTQ people down from an early age. You can grow up to embrace your sexual or gender identity but still feel a powerful residual self-hate.

I don’t know of a quick fix for myself—I wish I did. Labels or diagnoses without thoughtful, patient professional help and community support are not enough. But I’m certain that I would’ve appreciated hearing that other gay men felt this way, instead of struggling in silence. As much as I could’ve used their advice, I needed their honesty and understanding even more. So if you feel the same pain this pride, this is for you.

If you’re thinking about suicide, please call the Suicide Prevention Lifeline at 1-800-273-8255